Return with us now to those thrilling days of yesteryear. From out of the past come the thundering hoof beats of the great horse, Silver! The Lone Ranger rides again!

Uh, make that the thundering hoof beats of generic red wine. And the ranger is alone no more. He’s been joined by a cast of thousands—of wineries trying to get rid of wine grapes to a public that is simply swamped with boring varietals.

Those old enough to remember the 1970s and early 1980s may recall the fun we had with California Burgundy: Sebastiani’s with its core of Zinfandel, Foppiano’s with lots of Petite Sirah, Simi’s with a slug of Carignane, and dozens more.

These were the original two-buck chuck wines because, well, they were all about $1.99 a bottle and they went well with ground chuck. And they assiduously avoided the use of varietal names, since that was reserved for “fine” wine.

Today, however, we are faced with a terrible dilemma: too much generic varietal wine.

What’s that you say? There is no such thing as a generic varietal? Well, let me direct you to your nearest wine shop, supermarket, gas station convenience store or pharmacy where you will find shelves groaning with hundreds of California varietal wines all vying for your attention with aroma and taste profiles that are essentially exactly the same. Prices are about $12 a bottle or less. With emphasis on the less, especially lately.

There are many complicated reasons for the utter uniformity (and blandness) in the aroma and taste of so many California wines, mainly reds. Without addressing that, we now can all agree on one thing: There is too much sameness in too many varietal wines.

With red wines, at price points all the way from the lowest to highest, Cabernet Sauvignon now smells and tastes about the same as Merlot, and neither smells or tastes like the grape from which they supposedly came. The higher you go on the price scale, the more over-ripe and oaky the wine becomes, and the less varietal character you get. And the less said about Mega-Purple the better.

Syrah? It’s all pretty much the same sort of thing. Except for a tiny handful of cool-climate Syrahs, most everything is a boring, simplistic and indistinct red.

With whites, it’s almost as bad: Chardonnay that’s flaccid and lacks much food compatibility; Sauvignon Blanc so bland you’re hard pressed to identify it; Pinot Grigio that would lose a taste-off with San Pellegrino.

So where do wineries go when they have an excess of so-so Cabernet and Merlot and Syrah and a whole bunch of other stuff?

The word blend once was déclassé. It was seen as a mishmash, a cuvée fit for a café, not for a white tablecloth and crystal. We first started seeing upscale blends emerge from California with the Meritage wines of about 20 years ago, the Cabernet-Merlot wines that sold for as much as Reserve wines.

In the last few years, since about 2005, we have seen many red wine blends from California wineries that may make some sense to the winemakers, but to me they act a bit like the old “red table wine” and “Burgundy” blends of the past.

The main difference is that some of these wines are priced to compete with those winery’s higher-end Cabernet bottlings—and I’m left shaking my head and palate alike.

Now, I’m all for blends with a philosophical idea behind them, such as the Coro Mendocino wines, which must be at least 40% but no more than 70% Zinfandel, and which allows the winemaker to create from that partially painted canvas a wine that leans in the direction of the Rhône, Barolo, Chianti or even California.

I’m all for Rhône blends such as Ventana’s superb Grenache-based Rubystone, using Syrah to great advantage. And then we have Cabernet-Syrah blends and Syrah-Cabernet blends, some of which can be very nice, but many of which are simply brutes, lacking the character of either grape. 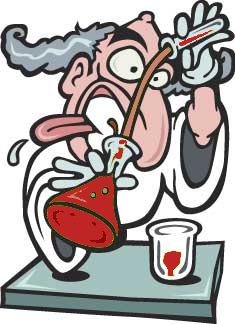 But what do you make out of Lava Cap’s American River Red Celebrated Cuvée, the 2005 of which has in it Zinfandel, Merlot, Syrah, Cabernet Franc and Barbera? The fact is, it is a nice wine and sells for $15.

Then there is Three Alarm Cellars’ non-vintage blend of Petite Verdot, Syrah, Petite Sirah and Merlot; it costs about $8. Save room in the pantheon of blends for Rutherford Ranch “Rhiannon,” which has 64% Cabernet Sauvignon, 29% Merlot, 5% Syrah and 2% Petite Sirah; this one costs $28.

To make a blend because it tastes better than a varietal is a noble tradition, and wines from the south of France often are based on blends with a regional tradition behind them. That tradition, however, was to make more interesting wines—not necessarily more expensive or sophisticated ones. But I am afraid that blending for blending’s sake is spinning out of control in California. A blend of Cabernet, Zinfandel, Gamay and Viognier is kind of a hodgepodge that oughtn’t cost $25. Too often such a wine does.

Maybe if producers were not aiming so high they’d be able to deliver some blends that shake off the sameness that is burdening their varietal palette. More like the old Beaulieu Burgundy, which was made up of 15 or more varieties. And which wasn’t made to compete with Cabernet Sauvignon.

Dan Berger is a freelance writer based in Sonoma County. Today, in addition to his privately published weekly wine commentary, Dan Berger’s Vintage Experiences, he writes a nationally syndicated wine column for Creators Syndicate as well as articles for numerous other publications.