Some people like to read on the beach. But for me, it’s right now—when the weather turns just a little chilly—that I refresh the stack of books I want to read. Curling under a blanket with a good book on a cool fall day has been one of the pleasures of my life since I was a kid. My dad would tuck an extra-long blanket all the way around my feet and legs and shoulders so only my wrists and hands were peeking out, just enough to hold the most recent juvenile fiction book from the local library.

These days it’s more likely to be some viticulture textbook or a memoir of childhood eating habits in India. Still, cooler weather always gets me to thinking about my favorite things to read—and reread. This year’s Top Five Rereads all focus on wine and food, but they don’t come from the usual suspects, like cookbooks or travelogues or magazines. 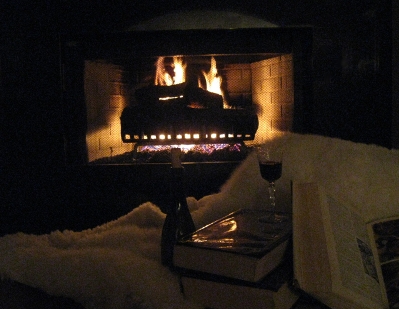 Confessions of an Advertising Man by David Ogilvy, first published in the early 1960s, was recommended to me as one of the best books on advertising ever written—and it is that —but Ogilvy devotes his first chapter to the time he spent as a young man working in a classic French kitchen. The writing itself is clever and candid. The content comes from a thoroughly unexpected source, making it all the more enjoyable and insightful, as Ogilvy extracts lessons from his education in a French kitchen and applies them to his legendary career in advertising.

George Orwell takes a similar tack, peppering the first few chapters of Down and Out in Paris and London (first published in 1933) in painful, painstaking detail. There is nothing romantic about the restaurant kitchens of young Orwell’s Paris, and there is even less romance to his life of poverty in London. Orwell pulls back the curtain to reveal a perspective of Parisian kitchens that is disgusting and frightful and all the more riveting for its contrast to today’s romantic notions of those same environments.

For a shift of gears, consider a chapter called “Murder in the Kitchen” in Alan Watts’s book Does It Matter? Watts was an early popularizer of Zen Buddhism in America; to an American audience interested in the life of the kitchen, “Murder in the Kitchen” made Buddhism relevant and sensible. The chapter is worth reading in full but the pivotal sentence is this: “The very least I can do for a creature that has died for me is to honor it, not with an empty ritual, but by cooking it to perfection and relishing it to the full.”

For the last soupcon of advice, and to extend the notion of relishing food to the fullest, I turn to the French. The Auberge of the Flowering Hearth sounds like a ridiculous title (I’m sure it sounds much better in its native language). It is nonetheless Roy Andries de Groot’s evocatively authentic recollection of the days and nights of a French country inn. De Groot captures the lifestlyle of the in a way that is anything but routine, and he devotes a full chapter to “A Proud Wine Cellar on a Low Budget.”

Mademoiselle Vivette is the co-proprietess of the auberge and overseer of its wine cellar. De Groot describes the slow process of extracting from her the very simple, practical secrets of developing a respectable collection, namely:

1) Get to know as many suppliers and shop owners as possible. By “suppliers” Vivette means wine merchants; and since each shop is a reflection of its owner’s personal opinions and orientation, it pays to shop around.

2) Trust your palate, and jump in when you love a wine whether it’s a fashionable vintage or not.

Each of these “rereads” has some years on it, but I return to them for the same reasons. They’re sensible, and true, and they make for very, very good reading under an autumn-weight blanket.