Four and ½ years after Granholm vs. Heald, the Supreme Court ruling that was supposed to create wine shipping liberty for all, wine shipping is still a tangled mess requiring a consumer movement to gently remind those that we put in power that they are merely functionaries for the will of the people.

Speaking of tangled mess, in the pantheon of wine knowledge, my respect goes not to the gentleman who can name all of the Bordeaux chateaus from the Right Bank, but instead it goes to the person that can parse the legalities of wine shipping from state to state. 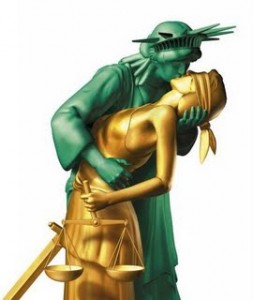 It’s an unfortunate fact that if you’re into wine more esoteric than California Cab, you need wine chops AND the research skills of a paralegal to make sense of whether or not you can actually have access to that wine in your state.

In the intervening years in between 2005 and now, much progress has been made for a small domestic winery to directly ship its wine to a consumer in a state.  And, while much progress has been made, much more needs to be made. Oft forgotten in the giddiness of finally being able to receive a domestic winery wine club shipment is the fact that there are 1000’s of wines, imported wines, still unavailable to much of the United States.  This is another small battle that also requires consumer support – the ability for a wine retailer in, say, New York, to legally ship to a consumer in Indiana, Michigan, Ohio or elsewhere.

You see, I have a growing interest in this.  As my palate matures, my interests take their ongoing evolution, and I learn more about the mechanisms of politics, I begin to see that politics, particularly wine politics, isn’t so much about reason as much as it is about protectionist self-interest – specifically, distributors protecting their business from competition and wayward consumer dollars.  But, therein lies the rub for consumers – if I want to buy specific wines like Mosel Rieslings from wine importer Terry Theise, that aren’t represented by a distributor in my state, it means I need to source the wine from a wine retailer who does carry them.  And then I find out, that, unfortunately, it’s illegal for a New York retailer to sell and ship to my state.

The reasons the special interest protectionist groups give for protecting the illegality of shipping to me are valid — if we lived in Stalin’s Russia.

Drunk driving and protecting our youth from underage drinking is their song, a song I won’t attempt sing.  I will point out, however, as hundreds of people have done before, that if drunk driving charges from those intoxicated on wine represent 1% of such arrests, I’d be surprised.  Likewise, the sweet tooth finicky palates of our teenagers are surely being saved from the need to make a credit card transaction, wait for shipping and then reveling in the pencil lead nuance of a Chateauneuf-du-Pape, right?

Nope, the real reason I can’t get these wines is because $100 bucks spent having a New York retailer ship Mosel Riesling to me means that I won’t spend that money buying wine locally, at a retailer and, ultimately, the local distributor that supplies them.

In order to combat this injustice, separate from, but analogous to the consumer fight relevant to domestic winery shipping, is The Specialty Wine Retailers Association (SWRA).  It is a non-profit organization that represents the interests of retailers and their ability to ship wine to consumers across the country.

While consumer-based organizations like “Free the Grapes” have done much good for organizing consumer engagement and mind share for domestic winery shipping issues, more work needs to be done on the retail side of the equation.

My call-to-action here is simple.  We all are involved in cause marketing of one sort or another whether its school fundraising, Girl Scout cookies, breast cancer awareness or something more local and more personal.  There is scarcely a person alive that isn’t involved in changing something as it exists today into a form that makes for a better tomorrow.  It’s practically the American way.  Given that, and given that I presume you to be passionate for wine if you’re reading this, my request for you is to simply make yourself more intelligently aware of the gross misconduct that occurs related to our wine laws, all of our wine laws, including the ability for retailers to ship where a customer resides, even if outside of state lines.

All action starts with literacy, and if you’re literate about the issues you’re likely going to be spurred into action, just as I have been.  “For the people, by the people” means, again, that our politicians are functionaries for the people, not deliverers of glad tidings for those that have an interest in keeping their slice of our American apple pie.