Continued from Part I.

After our whirlwind tour of Tain, we decided to stay close to home that evening, dining in the tiny restaurant in our hotel in Condrieu, La Réclusière. We chose the five-course tasting menu, awkwardly translated into English on a little card the hostess offered, smiling. We managed to ascertain that there would be soup, something with calamari, something with pork, a cheese course, dessert, and a lot of wine. What we didn’t know was that the chef would continually provision us with tiny amusements between the advertised courses, lavishing us with his hospitality. The hostess whisked away our menu cards and headed for the kitchen. 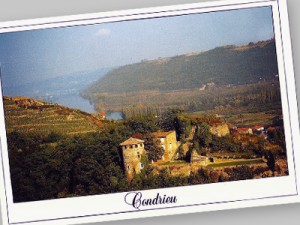 A postcard from Condrieu

The first wine arrived, a Verzier Condrieu, 1999. It was floral and fruity from the start, but after warming a bit it suddenly burst forth from the glass, a true apricot bomb.

I’d never before tasted Condrieu, a white made exclusively from Viognier. The hit of fruit and flowers was powerful, perhaps too much so, but it helped me see why this grape is also used in small quantities in Côte-Rôtie, the floral notes of the Viognier working to complement the earthy, meaty Syrah. Along with this the hostess served a tray of tiny appetizers, each no more than an amuse-bouche.

Then came a cold soup of fresh peas puréed with cream, topped with crème frâiche and a thin layer of aspic, a tiny tender parsley leaf decorating the center of the glistening gelée. My spoon slid easily through the layers, and as each spoonful entered the warmth of my mouth, the aspic vanished instantly, leaving behind the grassy green peas and cream, a taste of ephemeral spring.

Before we’d finished our soup, the second wine arrived, a Finon Condrieu 1999. This was closed at first and far too cold, but after about ten minutes began to give off the scent of lavender and a slight, vegetal astringency that married beautifully with the peas. 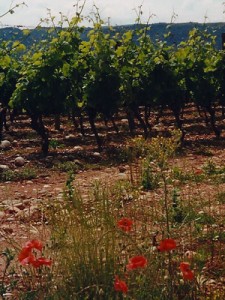 It’s not all sloped

The hostess cleared our bowls and brought an entremet. Then another cold course arrived, a ragoût with chunks of meat in a thick base of tomatoes and onions. This was served on a bed of tender lettuces and garnished with tiny fresh and pickled vegetables—cauliflower and carrots, bean sprouts, borage flowers, fennel. The meat was tender and silken, but—what was it, exactly? Our minds now relaxed, we could recall only vaguely something about squid, and something about cheeks. We decided this dish must be squid cheeks—did squid have cheeks?—and that squid cheeks were good.

Now we were nominally only two courses into the meal, but were on our fourth beautiful little serving and well into our second wine. We were starting to unwind, to feel the cool, spreading effects of the meal reaching down to our core and out to the ends of our limbs. We had forgotten nearly everything we’d read on the menu, forgotten the sequence and name of each dish, forgotten to anticipate one course and the next. We were joined only to the present, and at the hostess’s mercy. We ate, we put down our fork, our spoon; we drank, we set down our glass. And we awaited her next tender ministration.

More wine now—this one a Bonnefont Côte-Rôtie 1999, a meaty offering from the slopes of the Rhône. And at last, the main course. Here was succulent meat, sharp and salty but meltingly tender, braised with new carrots, plump pole beans, and black olives. We sopped the earthy, rustic stew with hard-crusted peasant rolls studded with walnuts and spread with more of that beautiful Beurre Échiré. And we laughed at ourselves, now, realizing our error. These were, indeed, the menu’s “cheeks”—not squid but, naturellement, pork. 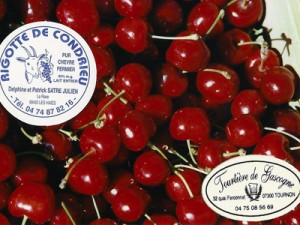 Cherries from a local stand, plus a label for fromage “Rigotte”

A cheese course followed. The hostess offered us a choice, and Steve selected a soft local goat cheese, Rigotte de Condrieu, which arrived drizzled with fruity olive oil and topped with fresh cracked pepper. I ordered a fresh, very soft goat cheese whose name I missed, but which was served in a small, shallow dish surrounded by a moat of cream and sugar. Tangy, velvety, and a little sweet, it was almost, but not quite, a dessert.

That was still to come. Steve had a crème brulée, cracking through the caramel to reveal a cool, smooth, nearly coffee-colored custard. It was delicious, with a haunting but completely unidentifiable flavor that, we learned from the hostess, came from a wine reduction. My dessert was something like rice pudding, but served with prunes stewed in wine and garnished with rosemary.

We could not have eaten one bite more, and we climbed the stairs to our bed a flight above, dazed and happy after a long day’s harvest.

Saturday morning, the bells of the town’s tiny church chiming through the mist in the distant square. Today was our day for serious tasting. Armed with a tattered copy of Parker’s “Wines of the Northern Rhône” that we’d found in a Parisian bookshop, we started making calls. Or rather, I started making calls, since, despite Steve’s pre-nuptial Pimsleur language course brush-up, he’d experienced substantial lingual paralysis on this trip and I wanted to save him from fresh horrors. Still, the combination of cold-calling and the Rhônish patois exacerbated my plight as I struggled to ask after tasting room hours.

Worse, though, was the dawning realization that we were perhaps out of luck. “I am sorry, Madame, we are closed on Saturdays,” answered one. “No, Madame, we are not open le weekend,” replied another. “We will re-open again next Wednesday.” 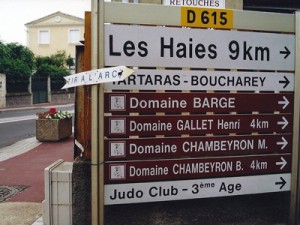 The turn in Ampuis for Domaine Gallet et al., plus Judo, if that’s your thing

We had made a very American assumption—formed by our trips to California wine country, where the tasting room lights are always burning—that the producers would cater to consumer timetables and consumer need. If customers had the weekend off and wanted to browse around and taste, the wineries would naturally accommodate, n’est pas? Perhaps à Paris, ma chère Madame, or even down in Tain, but ici—non.

At last, success. I had phoned a tiny producer outside of Ampuis, Domaine Henri Gallet. The pleasant Madame Gallet replied that yes, they could be open today for tours and tasting, as she was expecting another small group to arrive soon. Could we possibly come at eleven?

She patiently provided me directions, enunciating each word as if I were a child or deaf or both. I caught mention of a left turn at a pharmacy in Ampuis that I’d noticed on the way through, and beyond that lay only a few kilometers of rural road. She assured me there would be clear signage, and I hadn’t the heart to make her repeat herself more than once. So, clutching my sketchy directions, we hopped into the Fiat once more.

By some miracle we found our way, arriving at a spare farmhouse with a small sign by the door declaring the premises OUVERT. We knocked, and Madame Gallet, waving us in, showed us and two French couples straight to the cellar. There she treated us to a brief discussion of the wines, and of their recent experiments with new oak. Finally, she offered us a barrel tasting of the recent vintages. 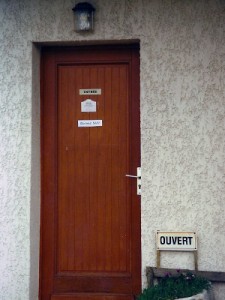 Here was a wholly new experience. Neither Steve nor I had ever tasted a wine in process, its work still underway. It was—not good, but interesting: full of tannins and fruit, all bumps and loud shouts, gangly but full of promise. How do you say that in French? What we lacked in language we made up for in enthusiastic pantomime, trying to convey to our host our appreciation for, if not the wine, at least the experience of tasting it.

Back upstairs in the modest tasting room, we sampled a few of the recent vintages. Monsieur Gallet joined us then, greeting the newcomers with sturdy handshakes. He poured us tastes from six bottlings of Côte-Rôtie, from the 2000 and 2001 vintages. They were remarkably different, some tannic and flat, others with a nose like pipe tobacco but lush to bursting on the palate. We purchased one from the second bottling of the 2000, a particularly rampant offering we thought would age beautifully.

While the Gallets were chatting with the French couples, Steve and I sipped and looked around at the bottles and trinkets arrayed casually on the shelves lining the walls. On one shelf I noticed a slightly curled Polaroid of a man, clearly taken while he was standing in front of said shelf. I held it up so Steve could see, and we nodded to each other knowingly.

Madame Gallet, noticing us suddenly, broke from her conversation to inform us, “C’est un critique Americain.”

“Oui,” we replied, nodding, we knew. It was Robert Parker.

They must have known he was famous—otherwise they wouldn’t have bothered with the Polaroid—but their attitude toward him was vigorously nonchalant. Madame Gallet couldn’t even recall his name off the top of her head, and seemed a bit surprised when we could. Here, Mr. Parker was, it seemed, simply another critic who landed on the doorstep every few years for a taste. Meanwhile, the Gallets would go on making wine the way they pleased, regardless of the appraisals of certain “critiques Americains.” 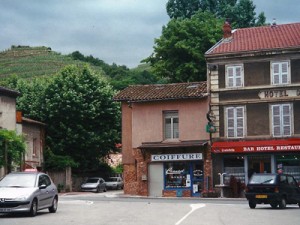 Ampuis, with the everpresent vineyards high above

And so it was throughout the Rhône. Our hosts in this wine country had been supremely genial and welcoming, patient with our inadequate language skills, tolerant of our acute cultural ignorance, indulgent when it was possible to be so, regretful when it was not. That we were willing and earnest—and probably overly apologetic—might have helped our cause. But it also strikes me that when a region’s character is so grounded in place, so rooted and self-sure, it might be easier to stretch to accommodate visitors, to let them have a little piece of the solid thing you hold, because there’s plenty here to share. And it might likewise be easier to regard critique as simply irrelevant, because what we have will last, and will outlive the visitor. We’re in it for the long haul.

Our first reconnaissance trip to the Northern Rhône was over seven years ago, now. We’ve never returned—or should I say, we haven’t yet returned. Meanwhile, the 2000 Gallet Côte-Rôtie rests in our cellar, maturing. Perhaps we’ll open it on our tenth anniversary—it should be in its prime by then—to remember the trip when our own young marriage was gangly and new, and ready to age for a long, long time.

Meg Houston Maker is a communications strategist and nonfiction essayist with a passion for food and wine. She authors Maker’s Table, a journal of food, wine, and the pleasures of the table, and is Executive Editor for Palate Press. Follow her on Twitter @makerstable.