ELEGANT AND READY, AMARONE DELLA VALPOLICELLA 2006 IS A WINE TO DRINK, NOW!

There was a particularly festive atmosphere this year at “Amarone Preview Vintage 2006” for two unsuspecting reasons. For years, Valpolicella was considered a prestigious Italian wine region, but wasn’t formally recognized until it was awarded the “Wine Region of the Year 2009” by the authoritative American magazine, ‘Wine Enthusiast‘. The other four wine regions in the running were: Champagne, the Rhone Valley in France, California’s Russian River Valley, and Stellenbosch in South Africa, all of which provided very stiff competition.

“This is an award for the entire appellation,” stated Luca Sartori, President of the Consorzio Tutela Vini Valpolicella, when  accepting this great honor on January 25th in the New York Public Library, “which not only recognizes the zone and its wines, but also the ability of its entrepreneurs and their investments, both in the vineyards and in the cellars, to improve quality”.

The second reason pertains to the extraordinary achievement of DOCG status for Amarone, which consecrates it upon the Olympus of world wine excellence. 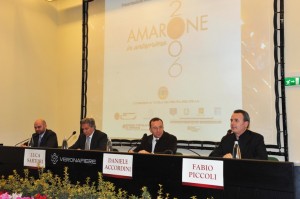 In recent years, the lack of DOCG (Denominazione di Origine Controllata e Garantita) status for Amarone della Valpolicella has been a sort of paradox to the international wine community. “It was not easy at all to explain the absence of a Guaranteed and Controlled Appellation of Origin status for a wine which has been considered one of the world’s great reds for years. Our Consortium guarantees the origin of Amarone production by insisting producers use our consortium label on the bottles.”

Amarone della Valpolicella is a very elegant and complex red wine that is made with the indigenous grapes: corvina, corvinone, rondinella (and small amounts of other dark, non-aromatic varieties recommended or authorized for the province of Verona). These same grapes are generally picked – barring anomalous weather conditions – between the last ten days of September and the first week of October. In order to successfully complete the critical phase of “appassimento” (drying), the fruit must be fully ripe and in perfect condition; therefore, the grape selection in the vineyard must be extremely accurate. Once picked, the grapes are carefully laid out on a flat surface to allow ample air circulation around the bunches, in either wooden or plastic trays, or on bamboo cane mats, and placed in special drying rooms located over the wine cellars called, fruttai – large and airy rooms to ensure optimal conditions necessary for drying.

In adverse weather conditions, which may support the growth of mold,  it is sometimes necessary to use air conditioning to reduce humidity levels inside the drying rooms.

The grapes remain in the drying rooms for three to four months, during which their health and well-being are continually monitored. During this time period, the grapes also undergo a series of dramatic changes: a reduction in acidity, water loss, higher concentration of sugars and polyphenols, and a significant increase in the amounts of glycerine and other components such as resveratrol, to which authoritative international research has attributed the beneficial effects of moderate wine drinking.

Once the drying period is completed, the grapes are crushed. In Valpolicella, there are two approaches to vinification that exist side by side. The more traditional method involves long fermentation at low natural cellar temperatures in January and February, followed by several months of maceration. In the more modern approach, wines are vinfied in multi-functional vats, allowing the producer to control temperatures, break up the cap and stir the skins in the must with the overall objective of making a softer style of Amarone with distinctive fruit character, which can be enjoyed after a relatively short aging period. Whatever the style of vinification, Amarone undergoes a period of natural ageing in wood which are typically in either large Slavonian oak barrels or French barriques. All this work,care and passion make Amarone della Valpolicella an absolutely unique and inimitable wine in the world.

In the 2006 vintage, Amarone wines not only showed great stylistic and territorial variability, but also revealed many common features, such as its optimum chromatic intensity, with hues ranging from bright ruby red to deep purple red. Thanks to its balanced tannins, 2006 Amarone wines are already revealing a lovely softness and drinkability at an early stage, while the degree of intensity and complexity in its bouquet is excellent. At the “Amarone Preview: Vintage 2006” journalists and wine bloggers alike could taste all 66 wines blind, some of which were barrel samples. Vintage 2006 has been on the market since 2008, but not every winery has bottled their wines, opting to wait a few months before their release.

Samples from the “66th Amarone della Valpolicella” blind tasting (the “classico” word on the label means that the wine is from the oldest and more historic production area):

Az.agr.Grotta del Ninfeo: “Amarone della Valpolicella 20006”: the wine is dark ruby in the glass, with delicious notes of cherries dipped in chocolate. In the mouth,  it’s balanced in both sugar and alcohol, leaving a long and pleasant finish.

Az.agr. Accordini Stefano: Amarone della Valpolicella Classico Doc “Acinatico 2006”. “Acinatico” means “born from berries” and was the name of ancient wine in Valpolicella, during the Roman age. Here, we have a wonderful, very tipical and delicious Amarone, with dark ruby and purple nuances, and concentrated flavors of cherries macerated in alcohol and balsamic herbs. In the mouth, the wine seems quite fruity and velvety. In short, it’s ready to drink!

Az.agr. Albino Armani Amarone della Valpolicella Classico Doc “Cuslanus”: The grapes of this Amarone came from the Marano hills, in a small, very green valley. These particular soils prevent the wine from becoming overly concentrated, and instead, provide a more elegant and graceful feel. The wine shows aromas of cherries, balsamic herbs and small red fruits, and the palate is both consistent and well balanced.

Az.Vinicola F.lli Farina, Amarone della Valpolicella 2006: this Amarone’s grapes are cultivated in San Pietro, within the village of Cariano, in the heart of Valpolicella Classica.  The colour appears red-black, with aromas of fresh herbs and small red fruit, spices and cherries. The finish is consistent, well balanced, long and warm. 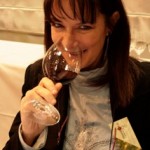 Elisabetta Tosi is a freelance wine journalist and wine blogger. She lives in Valpolicella, where the famous red wines Amarone, Ripasso and Recioto are produced. In her working time Elisabetta is a web-consultant for wineries, and in her free time she writes books about  Italian wines. Elisabetta is a contributor to Vino Prigo.