The Wine Trials 2011 is an interesting book. It has two basic premises, which it purports to support with scientific research. The first is that people, both wine experts and regular wine consumers, are so subject to the placebo effect that they cannot accurately judge the wines they like without tasting them – blind. The second is that people, when tasting wine blind, prefer inexpensive wines to their more costly brethren. Indeed, they go so far as to say there is no reason to purchase expensive wines. Therefore, they limit their reviews to wines that retail for $15 or less. The book is broken up into two sections, a discussion of methodology and support for the underlying hypothesis, and the reviews. This review will be similarly divided. 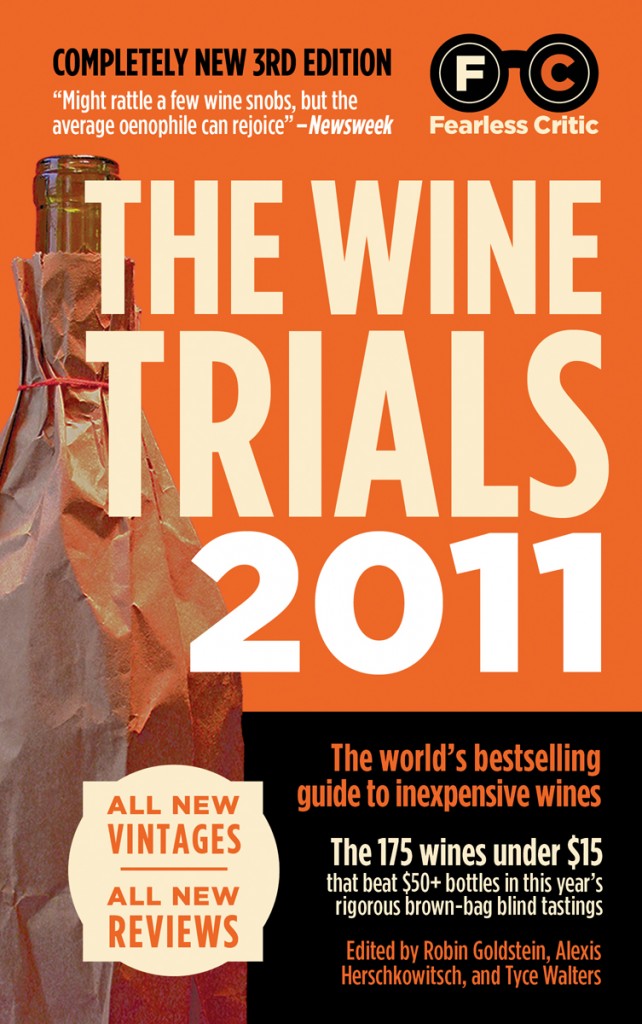 The heart of the book is a belief in blind tasting that boarders upon the devout, even the religious. Unfortunately, it uses science, or apparent science, to support polemics, rather than studying the science before reaching conclusions.

The authors of the book assume that people prefer less expensive wines. The support for this conclusion is found in studies that are based upon small tastes, and in one case upon tiny sips through a straw while prone in an MRI machine. From this the authors conclude that all wine tasting should be done blind, with no information about the wine, and in small sips. Not only is this not realistic (for who buys half a dozen bottles at a time each time they want some wine with dinner?), but it also does not reflect how people drink wine. They drink it by the glass, not the sip. Why does that matter? It is the difference between initial impressions and lingering flavors, quick tastes or lingering drinks, preferably with a meal.

To understand the difference without the mystery and fear that surround wine, imagine a very comparable food comparison. On a blind tasting, just one bite, three chews, then spit, how many people would pick a McDonalds cheeseburger, sweet with ketchup and a bleached white bun, tangy with a touch of mustard, with the scientifically formulated smooth, silky mouth-feel of artificial cheese, over a mutton chop from Keen’s Steakhouse in New York, or a chateaubriand from Bern’s in Tampa? But would it be as good on the third bite, or the fifth? Would you choose it as a favorite meal, even with a blindfold on? For most people, the answer is “no.” But look at the instructions they give, “encourage tasters to pour two-ounce (why?) portions, to take at most one swallow of each wine, and to spit on repeated tastes.” The tasting method favors initial impressions over drinking the wine, the McRib over a rack of lamb.

It also does not allow for the combination of food and wine, an essential part of wine tasting. Food is more than the thing you eat with wine. Food can actually alter the taste of wine. For an excellent discussion of how rare meat actually changes the way the mouth senses tannins, read What Wine Goes With Red Herring, by Arthur Przebinda, in Palate Press: The online wine magazine, The Best of the Press: Volume I. A zealot’s belief in blind tasting in small sips, sans food, all but guarantees that the greatest food-friendly wines, those that not only complement food but actually make the food better while the food improves the wine, will not be judged fairly. This is not to say that there is not a place for blind tasting, for there is, but unless it is done with a clear idea in mind of how food and wine interact, it is an exercise for the sake of the exercise, not to find the great wines of the world or the great wine bargains of the world.

Several of the points made by the authors are valid. The points they make, that outrageously priced wines are rarely worth the money, that the precision promised by a 100 point scale is absurd, that low priced wines rarely seem to get high ratings, and that the wine industry markets lifestyle, as well as taste, are all true. Unfortunately, they leap from the reasoned to the polemic, and then straight to the comical, with statements like:

But to surrender, instead, to the siren song of marketing and price signals—to buy what you’re told to buy—is to withdraw your own brain from free participation in our market economy. It is not just self-destructive. It is, to me, un-American.

Really? Responding to marketing is un-American? What America is he talking about? Surely not the place that brought us “baseball, hot dogs, apple pie, and Chevrolet.”

The ridiculous hyperbole is not the only problem with the book. It also seems to be guided by ignorance about wine. It shows in the reviews as well as the discussion. In the discussion you find the statement, “(t)annins are the quality that dry out the mouth; acidity is the opposite, the quality that makes your mouth water.”

Tannins are not a “quality,” like “fruity,” or “aromatic.” Tannins are an element of wine, molecules actually in the glass. They derive from grape skins, seeds, and stems. Tannins are an important part of red wine. They are also the element that make some red wines, mouth-drying when sipped alone, such marvelous pairings with red meat, as discussed above. This refusal to acknowledge the importance of food with wine runs throughout the book. It also raises another question. Throughout the book the writers note how wine professionals like bigger, more tannic wines in the blind tastings than non-professionals. They never take into consideration, though, that the professionals might be evaluating the wine with the knowledge of how they would change and pair with food.

That same ignorance is also on display in the wine reviews. Several of the wines were clearly flawed. A flaw may indicate a problem with a specific bottle of wine, rather than simply wine poorly made. A competent taster would identify the flaw and, where appropriate, not judge the label and vintage poorly, but instead set aside the bottle as flawed, and if extreme to the point of undrinkable, “faulty.” The truly curious thing about this book, though, is that it was clear that several bottles were flawed, and not only were they reviewed, they were actually recommended. Without naming the wines, for no decent reviewer would write about a flawed wine, these reviews were included as recommended wines.

The book also recommended wines that were, just based upon the tasting notes that came with the recommendations, not very good. Do any of these sound like something you might want on your dinner table? Again, I will not name them, for if I lack confidence in the reviews I will not malign the wines in Palate Press.

There were also some reviews that just seemed absurd, ignorant of some very basic wine knowledge, including:

For all the deep commitment to blind tasting, one other trend showed in the reviews. Every wine was tasted blind and every review came with food recommendations. How, though, did they blind taste boxed wines? Curiously, the boxed wines all had similar food recommendations, for inexpensive every day or picnic foods, including sloppy joes, meatloaf, and hamburgers. Bottled wines with similar flavor profiles came with recommendations for “a great big steak,” or if it called for a burger it often called for venison, buffalo, or even lamb burgers.

The Wine Trials 2011 has some interesting information. Unfortunately, the militant insistence on one form of blind tasting, multiple bottles, small sips, quick impressions, and no food, is not only unrealistic for most wine drinkers, it is also bad advice. For people who have not studied wine in some depth, people with the ability to project in their minds how a wine will change with food or with age, the method does not test the quality of the wine. The weakness of the method shines through in the actual reviews, where flawed and badly made wines were recommended to unsuspecting readers.