Kerin O’Keefe’s Brunello di Montalcino is not simply an enjoyable wine book; it’s one of the rare wine books that is truly important. O’Keefe, an American writer with many years experience in Italy and, particularly, in Tuscany, sets out to explain what makes this wine so special. And in doing so, she takes a sledgehammer to the developments that have threatened to make Brunello just another wine, indistinguishable from the masses.

This is a wine geek’s book, it should be noted. This is not the kind of book to hand to a friend in an attempt to inspire them to try new wines. It’s just a bit too technical, too detailed for that. But that’s okay. O’Keefe is under no illusion about what she’s trying to accomplish. The title is decidedly calm, compared to other recent wine books that seek to grab readers’ attention (Summer in a Glass, anyone?). And O’Keefe chooses not to begin with a riveting story or two, even though she certainly could have. Instead, she expects that readers will have some baseline knowledge of Brunello. She expects that they’ve come for a bit of history, and a bit of investigative work, along with a detailed range of updated winery information.

Think of the book as two main parts (and this structuring decision was perfect). The first, roughly 100 pages, lays out the history of Montalcino and Brunello, from the early days to the recent Brunellogate scandal. The second section, roughly 200 pages, consists of wonderfully detailed information on her preferred Brunello-producing wineries, including contact information for travelers, estate history, winemaking philosophy, and tasting notes. 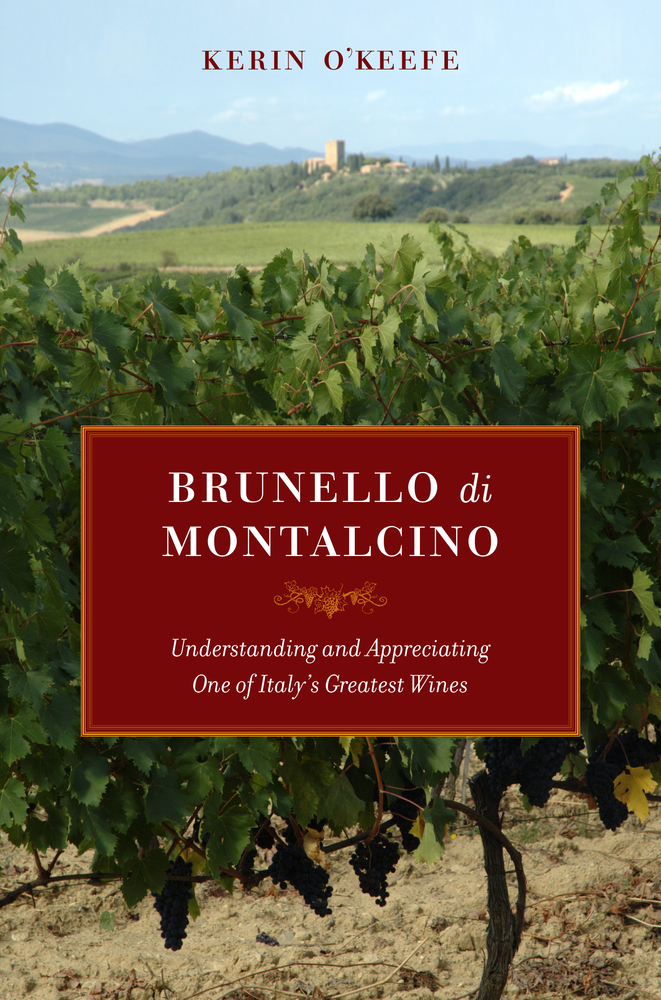 If you love Brunello, I still expect that you’ll learn something new in those first 100 pages. The best example comes in O’Keefe’s rich description of what sets Montalcino apart for sangiovese (the grape exclusively used to make Brunello). After all, sangiovese is grown across Italy and in other countries. Why should we believe it can produce a wine much more complex in this small part of Tuscany? The fascinating answer lies in the way oceans once covered the earth, then receded over many years.  O’Keefe talks to experts who have determined — and who have shown via elaborate soil samples — that Montalcino was the spot where oceans washed back and forth multiple times, instead of simply receding to reveal the landscape. This cycle of seawater receding, then returning, then receding again left an intricately layered terrain. However, not all parts of the Montalcino growing zone enjoy this benefit. As O’Keefe lays out, it’s the mid-to-upper elevations that find the complex marine soils. She even includes a photograph of fossils unearthed at one estate.

O’Keefe loves traditional Brunello, but she is not a cheerleader for the region, and she takes some serious risks in her book. For example, O’Keefe unloads on Banfi, the American-owned estate that arrived during the 1970s. Banfi is a massive producer, and O’Keefe acknowledges that Banfi has helped the region gain fame and critical recognition. But O’Keefe points directly at Banfi as the catalyst for the explosion of new vineyard sites around Montalcino, many of which are poorly suited to grow Sangiovese Grosso.

Why is that a risk? Authors — and their publishers — often need help to sell a book. O’Keefe has chosen to write an honest book instead of glossing over what she perceives to be the problems. She could have written a book that focuses on the estates and stories she enjoys. Instead, she wanted a book that is comprehensive, and that must include the warts and scars. Not only will she receive no help with this book from Banfi, the largest estate, it’s easy to imagine some producers actively seeking to undermine it.

The author’s values shine through in every chapter. O’Keefe speaks for many, many fans of Brunello who dread the internationalization of these wines. Her tasting notes are impressive, and she takes a brickbat to critics who celebrate the ubiquitous chocolate notes now so often lurking in Italian wines. Those notes come from wood, not the land, and not the grapes, she explains.

The chapter on Brunellogate is a helpful guide to the scandal that nearly destroyed Brunello. Briefly, some (or many) producers were illegally cutting their Brunellos with some percentage of other grape varieties, including Bordeaux varieties. This led to a regional debate about whether producers should be legally permitted to use other grapes. O’Keefe has done exhaustive journalistic work and spoke to many of the main players in that drama; it’s a great benefit to her book. And she levels a succinct and persuasive conclusion on this controversy: Anyone who wants to make wine in Tuscany using Sangiovese alongside international varieties is already permitted to do so. It’s called a Super-Tuscan, a wine for which the market is apparently falling apart already. Why make Brunello another Super-Tuscan?

If there is one complaint, it’s that O’Keefe on occasion could stand to include more specific producers to make her point. She explains in the Brunellogate chapter that stricter Italian laws make it dicey to reveal specific names, so she doesn’t list the wineries that got caught. And in an otherwise very effective chapter looking past Brunellogate at the future of the region, she relies too often on generalizations. For example, she says that some wineries had already clearly reverted to either breaking the laws or using overly invasive winemaking techniques in the 2006 vintage, and she writes that some wineries are suspected to have swapped out their 2004 and 2005 wines with other Brunellos to placate the authorities. But who are these wineries? It would be helpful to know.

She is also rather optimistic in offering this conclusion: “The collective boredom of high-octane wines made from international grapes produced around the world means that more wine lovers than ever are looking for out-of-the-ordinary bottlings, and are turning a keen eye to Italy’s wines made from native vines, like select Brunellos that boast quintessential Sangiovese.” Fair enough, but how does she know? Are sales suffering for the estates that she doesn’t prefer? What’s the metric, other than observation?

The book lays out a very solid case for subzones in Montalcino. Brunello from the southern part of the appellation might be nothing like Brunello from the higher elevations closer to town, but how would consumers know that? O’Keefe breaks down her section on wineries by subzone, which is extremely helpful for travelers and wine buyers. Some of the critical darlings of Brunello are left out completely — no Valdicava, no Siro Pacenti, no Casanova di Neri — and that is no accident. But this section is hardly lacking in new ideas for Brunello lovers; O’Keefe turns the spotlight on estates large and small, some of them extremely small and hard to find. For those traveling to Montalcino, this book will be an invaluable guide.

Ultimately, Kerin O’Keefe has done a great service to Montalcino and to wine lovers who appreciate a sense of history and place. Tuscany, as she reveals, has some growing up to do. It is unlike Piedmont in the way that it has allowed outsiders to dominate the conversation and the production. This book comes at a time when the region has the opportunity to determine its identity going forward. Thanks to Kerin O’Keefe, that identity is more likely to be mindful of Montalcino’s riveting past.

Evan Dawson is a news anchor / reporter at the ABC News affiliate in Rochester, NY. He has reported on public policy and politics for more than 10 years. He is the Managing Editor of the New York Cork Report, as well as the author of the critically acclaimed Summer in a Glass: The Coming of Age of Winemaking in the Finger Lakes.