Tasting notes are the hardest thing for me to write about wine.

I have strong opinions about the elements of a good tasting note. But while I love a good argument, I have stayed out of this one because I don’t feel comfortable telling other people how to write them. 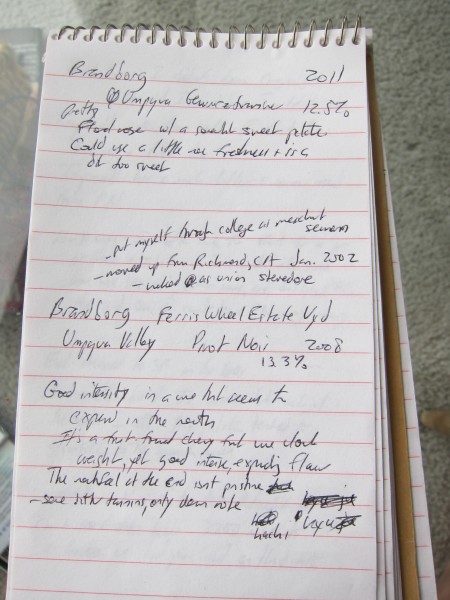 The most successful and popular tasting notes in the world are Robert Parker’s. They’re not how I like to write. But telling beginning writers not to emulate Stephen King is silly.

I worked for a while with a chef turned writer who has one of the best palates I know; more acute than mine. She can taste an unsuccessful recipe and instantly analyze how to fix it. I trust her taste in wine, especially in the difficult task of trying not to miss the subtleties of the 40th wine of the day. But (I hope she’s not reading this) she’s not a vibrant writer; her tasting notes tend to be a collection of the many subtle flavors she detects. I don’t taste all those flavors, but I don’t doubt that she does. Who am I to tell her what to write?

The New York Times wine critic Eric Asimov makes some great points about tasting notes in his new book, “How to Love Wine.” He has irritated bloggers by telling them to not write tasting notes at all. But that’s not really his point in the book. His point is that the notes that tell you the most are not about the fruit, but about everything else: the texture, the freshness, the body.

Asimov’s right: who buys a wine because it’s described as tasting like peaches instead of apricots? But there is a difference between red fruit and black, or stone fruit and citrus, and that’s information worth knowing.

Here are my goals in writing a tasting note.

If I have only two sentences, I want to use one to tell you where the wine came from, and why it tastes like it does.

But I don’t expect my readers to know what “calcareous soil” means. If the dirt is key, I have to spend the space to explain why. Same thing with winemakers. I try not to name-check someone without saying what their style or background is.

2) A succinct description of the most notable flavor and aroma characteristics of the wine.

This is harder than it sounds, especially when writing a lot of notes about the same kind of wine. Try tasting 20 Chardonnays in a row some time and not saying “rich body yet balanced with citrus fruit and some toasty oak” over and over.

This point is the crux of a good tasting note. The context sets the stage, but people do want to know what the wine tastes like.

I don’t want my notes to read flabbily. Muscular writing verbs its way into your brain. I came, I saw, I drank the wine.

Tiresome writing has more nouns and adjectives. “Lean, crisp and wonderfully scented, the delicious wine has aromas of grapefruit and wildflowers.” The sentence is descriptive, but it’s flat. You can get away with one, but several in a row will exhaust the reader’s brain just as a high pH wine tires your palate.

Yet it’s really hard to use verbs in tasting notes. What does wine do? It runs down your tongue and into your throat, unless you spit it out, and nobody wants to read about that. The flavors don’t do anything: they just are. Do berries really burst from the glass? Do flowers fill your nose?

This is one of my greatest struggles: not just to capture the taste sensations of the wine, but to do it in an interesting way.

4) An honest appraisal of where this wine fits in the spectrum of all wines and of wines of its type.

This is the purpose of the 100-point scale, and the third-most important reason I support it. (Reason 1: First Amendment. Reason 2: Ordinary consumers like it.)

If I visit Chablis, all my notes sound similar. The 100-point scale rating, published or not, reminds me weeks later which wines I liked best. I know a few writers who oppose the 100-point scale, yet use it in their own notes.

It’s even more important for red wines that can have some funkiness, like Pinot Noir. If I just read descriptions, I’m drawn to the wine that sounds the most complex. But sometimes a fresh, bright, straightforward wine is more pleasurable.

One thing I dislike about the media world is that writers are rewarded for overstating the greatness of whatever they’re writing about. Editors will tell you, “If it’s not great, why are you writing about it?” Food writers play this game all the time, writing effusive paeans to fairly ordinary products in order to sell a story.

It’s another reason I struggle with tasting notes. Let’s be honest: the majority of wines these days are in a narrower range than we admit, good under the right circumstances, but not life-changing. Kermit Lynch once wrote of a wine, “A mouth rinse, for when you need one.” I know exactly what he meant, but editors don’t want that, and neither do most readers.

Add those four goals together and that’s a lot of pressure for tasting notes. It’s why I struggle with them: to me, they’re not just a list of flavors. They should tell an entire story in a short space. I write a few hundred tasting notes a year and I think I achieve my own goals maybe 10 times a year.

This is why I don’t want to tell other people how to write tasting notes. I’ve done thousands, and I haven’t mastered it myself yet. Frankly, I’d give myself about an 85. Or, on the Wine Advocate scale, a 91: my notes are acceptable for daily use, but not exciting enough for special occasions, though there are times when they’re multi-layered blockbusters that burst from the page.