A food writer friend of mine got a visit from the grammar police recently, who gave him a snoutful of snootiness over his use of “varietal” to describe wine grapes.

His correspondent wrote the following:

“One of my biggest peeves is the improper use of the term varietal in wine articles … A varietal is a *wine* made from a specific grape *variety*.” 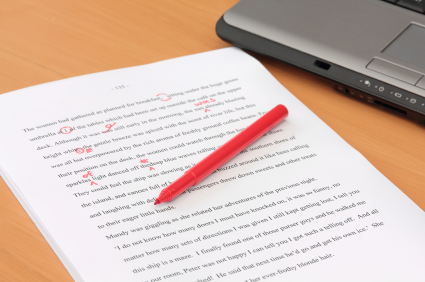 The reader went on to flaunt his knowledge of what percentage of a grape is needed for varietal labeling in the US and Europe, and to suggest a correction of my friend’s sentence.

My friend asked me by email if he should change his article online to appease the peeved pedant. My immediate reaction was, yes, make the change.

The next day, though, I got to thinking about the history and evolution of the word “varietal,” the nature of English, and the grammar police.

When I worked as a city editor at a newspaper, I got an envelope every month stuffed with clippings from a reader who circled in red every grammatical error he spotted. Sometimes he caught us misplacing a comma; shame on us. But half the citations were split infinitives, and under each one, he slashed in angry red ink: “To boldly go … SPLIT INFINITVE!!!!”

Thing is, there’s nothing wrong with splitting an infinitive. A few prescriptive grammarians in the 19th century tried to outlaw them, but like today’s Tea Party, they weren’t the largest group, just the loudest. Today the majority of grammar authorities, perhaps raised on Star Trek, accept split infinitives as correct.

Sometimes you have to make choices for the sound and rhythm of language. The placement of the adverb makes a difference:

To march swiftly into darkness

I like this; the juxtaposition of speed and darkness. “To swiftly march” is not as poetic.

To boldly go where no man has gone before

I’m with Gene Rodenberry. I could make an argument about which word gets accentuated, but it just has better rhythm this way. Beyond having way too much time on his hands, that grammar policeman was out of line.

And so is his fellow self-appointed patroller of the language.

The birth of a noun

Do you know how old the word “varietal” is? Quite possibly not as old as the grammar cop. Merriam-Webster lists the first known use of “varietal” as a noun meaning “a wine bearing the name of the principal grape from which it is made” as 1950.

“Varietal” was used by Frank Schoonmaker in his campaign to get American wineries to stop calling their wines “Chablis” and “Burgundy.” The assumption was that nobody would buy a US wine named in the European way, after a place like “Geyserville” or “Lytton Springs.” Who knew, in 1950, that Ballard Canyon or Willamette Valley would one day have value on a wine label? We didn’t even understand then which regions were best. At some level, we knew Napa Valley was better than San Joaquin Valley, but people still preferred flatlands to hillsides because they were easier to farm.

Schoonmaker campaigned successfully to have US wineries do something that had almost never been done in Europe, and in fact is illegal in most of France: Name their wines after the grape varieties they’re made from. He called this idea “varietal wines” in the 1930s, when he  started writing about it. It took less than 15 years, according to Merriam-Webster, for publications to shorten that to “varietals.” I’m sure the grammar police of the 1950s were apopletic: “That’s not a noun!!!!”

It’s amazing how much power wine label language has over winemaking. US wine might be better today if Americans understood that a single-vineyard blend of Syrah, Grenache and Mourvedre is more interesting, more genuine, less manipulated than a wine labeled “Syrah” sourced from 6 vineyards in different regions. Great intentions, unforeseen consequences. But you can’t blame the word “varietal” itself. The word did not create the idea; it merely describes it.

Things were different in 1950. Almost nobody could use “varietal” as a noun because almost no wineries were producing them. Martin Ray made Pinot Noir and called it that, and maybe to describe the idea, he called it a “varietal.”

But the noun form still wasn’t heavily used until the 1980s, when Gallo introduced a low-priced line ($5 and under) of wines called Merlot and Cabernet Sauvignon instead of Hearty Burgundy. These were a huge hit and the industry gave them the name “fighting varietals,” which is shorter, punchier and more useful than “fighting varietal wines.”

I’ll bet the grammar police hated “fighting varietals.” I don’t know when Merriam-Webster conceded that “varietal” can be a noun; I’ll bet it wasn’t until the 1990s. “Varietal” doesn’t look like a noun, but that’s the way English works: it evolves to get more efficient. If English were German, traubesortewein (“grape variety wine”) would be a perfectly good word. Germany is a country that eats pork all the time, and needs 15 letters (“schweinefleisch”) to say it. I would hate to be a headline writer in Munich.

You don’t need the word “wine” in “varietal wine” to explain exactly what you need to say. In newspapers and most magazines, more concise is always better (which is why I hate the word “utilize,” but I digress, and that eats space.)

Anyway, “varietal” became widely accepted as a noun less than a generation ago, and it clearly means wine. Now writers like my friend, a professional food writer, use it to mean “a wine grape variety.” And he’s not alone.

I googled the word “varietal,” which is how people check information now. One of the first listings comes from never-reliable About.com, which gives as its example sentence, “Pinot Noir is a tricky varietal to grow.” I’ll say: it’s really hard to get glass bottles to sprout.

Then I looked at some pages from folks who know wine. My friends at Stolpman Vineyards have an online “varietal map,” and it shows blocks of grapes, not rows of bottles. Tablas Creek, discussing Counoise, uses “variety” and “varietal” interchangeably, as in this sentence: “the varietals planted by Ducos (including Counoise) comprised 11 of the 13 allowed Châteauneuf-du-Pape varieties.” The Loire Valley Wine Bureau’s website calls Chardonnay a varietal even though it’s not allowed to make up more than 20% of any wine.

English isn’t like French or Hebrew. There is no language bureau dedicated to enforcing rules. In fact, English is notably absent from the Wikipedia page of Language regulators. Mandarin Chinese has four different official bodies that claim authority. There are regulatory bodies for almost every language you can think of — German, Spanish, Serbian — and for languages I’d never heard of, like Secwepemctsin. There’s even an official regulatory body for Yiddish (oy, vey.)

Who would run the English police? Did you know 88 countries count English as an official language? Could you be the one to tell Belize and Uganda and Australia that they have to follow American vocabulary rules? Good luck with that, mate.

This is the reason English conquered the world: It adapts. It evolves. The language is like the economic theory of the British imperialists who spread it. English doesn’t dictate how you get the job of communication done; it lets you do the job in your own way and takes advantage of the results.

It’s just too late to argue for the restricted meaning of “varietal.” When Merriam-Webster updates its entry to include “2. A grape variety,” the first known use will probably be from the 1990s, and would have been considered wrong at the time, just as the groundbreaking 1950 use as a noun was.

My editor doesn’t like this column. He says, “Saying it’s a losing fight is one thing; arguing that it should be encouraged is another.”

But I like the expanded meaning of “varietal” in a way I don’t like “skillz” or “a-hole” or “You’re all set?” It gives more information in less space because it also means “grape,” whereas “variety” can refer to apples or oranges. You can’t just write “farmers there grow varieties including Alvarinho and Azal” unless you have already made clear that you’re talking about wine grapes. Change that to “varietals” and the sentence is clear.

So I say, go forth, food writers, and use “varietal” as a noun meaning “wine grape variety.” Tell the grammar police to boldly go to hell.