I’ve never actually attended one of the infamous Riedel seminars at which a sleek Riedel representative demonstrates the magic transformative power of their varietal-specific glassware – living in a small town has its limitations – but I can’t say that I see much point. I would go for the sake of curiosity, but we all already know the outcome. Wine smells and therefore tastes better in nice, spacious Riedel glasses than in stingy standard international tasting glasses. Even when the comparisons are a bit more fair – Riesling in a Riesling glass versus Riesling in a Cabernet glass, perchance – it’s hard to trust judgments that come out of a tasting seminar. The power of suggestion (and all of that Riedel marketing) is too seductive. Observing the same issue, plenty of wine bloggers have tried to escape that influence by taking the experiment home to their kitchens or living rooms, with mixed effects. 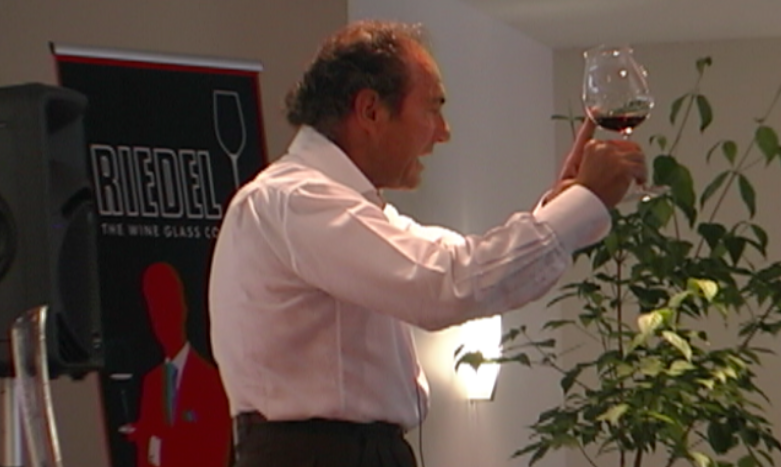 But all of these more or less interesting ways of approaching the question of whether and how glass shape influences wine smell and flavor are missing something: the clinical approach of a trained sensory chemist, and preferably one with a well-equipped biochemistry lab at her disposal. The sensory scientist will still approach the question from the point of view of what real live human tasters can observe; in the end, it’s easy to argue that what really matters is not whether a machine can detect a difference, but whether someone with a nose can perceive a difference. So the sensory scientist will still employ the basic sniff test, but will do so more… well… scientifically.

Instead of just asking guinea pigs to describe how a wine smells or tastes in their own, ad hoc terms, the sensory scientist will be more specific on a few different levels. She’ll likely try to tease out different elements of “taste” – different elements of aroma, and possibly also mouthfeel; acidity, sweetness, and bitterness (real tastes as opposed to smells), and intensity. The tasting panel might be a group of one-time volunteers. But if it’s a trained panel, panelists will probably be trained to fit their descriptions into a particular scale, which means that they’ll spend a few hours – sometimes quite a few hours – sniffing and/or tasting (depending on the study) exemplar wines as a group. They’ll learn things like what “floral” smells like for the purpose of this study. Everyone on the tasting panel will start off with their own ideas about “floral” in wine, but they should all end the training time with the same locked-in definition of “floral.” They are, effectually, calibrating their way of describing their perceptions to a common standard.

There have been plenty of such sensory studies investigating the effects – or lack thereof – of glass shape on aroma, but their results have been inconclusive. That’s hardly surprising when you think about how many decisions the sensory scientist needs to make about the experiment, how those decisions influence the study results, and how many other variables need to be held constant to isolate just the effect of glass shape by itself. First, who does the smelling? Random untrained sometimes-wine drinkers? Or enology students who have participated in multiple trained tasting panels? (Studies have been conducted with both, though not at the same time as far as I’ve read). Second, what kind of wine do you use? Not only are different components of wine aromas differently affected by space – something plenty of studies have shown – but wine aromas change at different rates after pouring; one study threw out all of the Chardonnay data because the Chardonnay aromas changed too much between a first and a later sniff. Third, do you let everyone sniff on his own, or do you try to standardize everyone’s sniffing experience? If you’re aiming for standardization, really, how do you ensure that everyone’s sniff is the same? The study with the Chardonnay-related issues used a remarkably complicated contraption consisting of a padded headrest (similar to the cage-like business the optometrist uses to keep your head still), a moveable platform so that differently sized glasses could all be held at the same distance from the smeller’s face, a vortex – a shaking platform often found in molecular biology labs – underneath the glass to mimic swirling, and a blindfold so that the smeller didn’t see any of this.

No matter, some variables can’t be controlled. The biggest: humans. Every taster/sniffer is different. There’s no getting around it: the individual is often one of the biggest sources of variance in a sensory study; in other words, when we see differences between data points that suggest that different conditions in a study (like the use of different wine glasses) might be different, we can explain a lot of that difference by looking at who was doing the tasting that generated that data point.

Still, all of this isn’t to say that we should just throw the idea of performing a study into the glass recycling along with our superlatively specific wine glasses. The results of such studies can be useful and informative; they just won’t be The One Answer for all time. This past year, the superb sensory folk at UC Davis applied themselves to considering what happens in the headspace – the air held above the wine inside a part-full glass – as wine sits for a while in differently shaped glasses. An important question: the air in the headspace is what we sniff when we sniff and most of what our nose contacts when we sip, and we usually let wine rest in glasses for a bit during normal drinking conditions. This study differed from others by letting the wine sit – equilibrate – in the glass for measured amounts of time instead of having sniffers smell immediately or ignoring the time factor. It used trained panelists who we can assume were pretty savvy about wine – students, staff, and faculty of the UC Davis viticulture and enology department – and looked for chemical differences (using solid phase microextraction; really not part of the story here) in addition to applying the sniff test.

The sensory team poured the same Gewürtztraminer into five “glasses”: a Zweisel Bordeaux glass, an IKEA white wine glass, an IKEA red wine glass, a standard INAO tasting glass, and an Erlenmeyer flask. Each of these, after sitting for zero or five or ten minutes, was held up against the upper lip of a blindfolded panelist for twenty-five seconds. Panelists then ranked the strength of the aroma by fruity, floral, chemical, alcohol/hot, and total aroma intensity; no resmells. Generally speaking, the Bordeaux glass and the INAO glass tended to emphasize the fruity and floral elements of the Gewürtztraminer, while the IKEA red wine glass emphasized hot and chemical qualities. The IKEA white wine glass ended up somewhere in the middle, and the Erlenmeyer flask data was tossed out (for sniffing, not for the chemical analysis), because the panelists could tell the difference between the thick, rolled rim of the Erlenmeyer and the thin rim of the wine glasses; they couldn’t distinguish between the feel of the other wine glasses by upper-lip touch alone. Likewise, chemical analysis showed significant differences in the concentration of multiple aromatic molecules in the glass headspace; in other words, glass shape alone caused different aroma compounds to emerge into the air (thereby becoming smellable) in different ways. 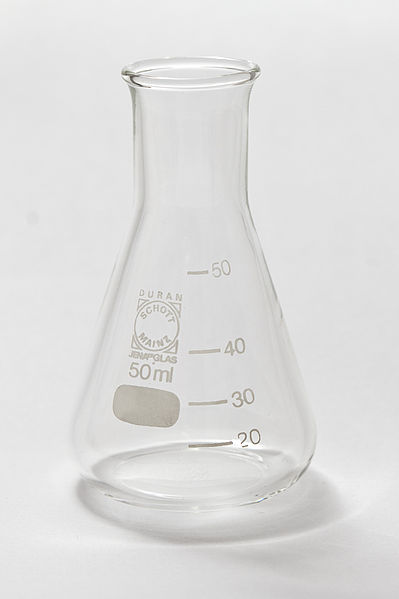 Discussing their results, the sensory team was quick to point out that their experimental conditions don’t mimic normal drinking – there was no swirling here – and that they say very little about actual drinking experiences. They do, nevertheless, provide evidence that glass shape changes the ways in which aromatic compounds come up into the headspace of a glass over time, and that we’re capable of smelling at least some of those differences.

Even if the exact same experiment were to be repeated with every glass in the world so that we could make a map of what sensory characteristics each glass emphasized – a splendid idea, now that I think about it – we’d still have plenty of questions to answer. None of the studies I read addressed the tactile element, for one. Common knowledge says that wine tastes better out of a thin-rimmed glass than out of a thick-lipped one, and I agree; nothing is worse than drinking wine out of a coffee mug. And yet, coffee is great out of a coffee mug, and the idea of drinking even iced coffee out of a wine glass isn’t very appealing. And beer is usually served in pretty solid glasses, with which I’ve never thought to have a problem even when I’m drinking serious attention-grabbing beer. Are thin-rimmed vessels always better for tasting everything, excepting when hot temperatures make a little more lip-protection necessary? Or is there something about the sensory properties of wine that call out with especial necessity for thinness? There are probably studies about this question, but it isn’t a factor I see being incorporated into tests of different wine glasses.

The bottom line: Does glass shape matter, absolutely? Yes. Will one glass emphasize certain aromas in a different way than another glass? Yes. Are those differences significant for you, at your dining room table, with your Washington cabernet blend, in your Bordeaux glass versus your zinfandel glass? No study will tell you that save the one you do yourself at your own table.