It looks like a paradox: never in Italy have people drunk so little wine, and never has wine been a more successful topic for Italians to learn about. According the Italian wine association Assoenologi, the consumption of wine in Italy has declined from 29 gallons a year in the 1970s to 11 gallons today. This is because, while in the past all meals were eaten at home —  and nobody sat at their table without a bottle of wine (no matter what) — nowadays people drink less but drink better (or so we hear), often consuming lunch and/or dinner away from home.

Tasting courses for sommeliers and opportunities for winelovers to attend to wine events, fairs, or exhibition have seen a tremendous growth in the recent years.  However, more recently things have changed again in the wine world. Due to reasons like the current, serious economic crisis, or the willingness to try new methods for tasting wine, overall wine consumption is dropping in restaurants and wine bars. But Italians aren’t giving up to their favorite beverage: they are shifting their winetasting elsewhere. To private homes. 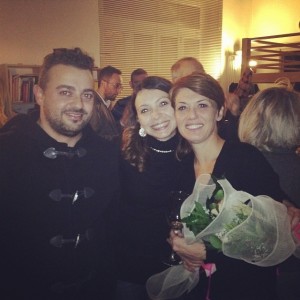 “Vini a casa mia” (Wines at my Home) is an initiative launched in 2012 by the winelover Marco Ghezzi: “It was born by chance, talking with some friends who are wine producers in the Romagna region,” says Marco. “I convinced them to come to Milan to present their wines to a few wine shops, and since we had a few free hours in the afternoon, I thought it would be nice to organize an additional tasting in my home, with a few selected guests. The tasting was so beautiful and exciting that the participants themselves asked me to organize more gatherings like that, and so I did. As you can imagine, the settings are anything but formal. Everybody is relaxed and very often the main topic of the discussion is left to the serendipity of the evening…”

“Who are the guests, and what do they have to do?” I asked him.

“The guests are wine lovers, journalists, bloggers, chefs, sommeliers, traders, and even artists and musicians, because I love to mix their experiences. They are there to simply have fun. And share the evening on social networks. Additionally, all the comments and stories are gathered on Storify.”

“In the beginning it was like a traditional tasting,” relates Marilena Barbera, who owns a winery in the Menfi area of Sicily. “But the project has evolved toward new forms of communication and collaboration.” Marilena has been at more than one gathering with her wines. “For example, we had an evening called “Tasting Crossed” with a producer, Armin Kobler, coming from South Tyrol, a totally different area of Italy than my Sicily. He presented his white wines, and I poured my reds. Another one was “The Bad Girls of Wine,” where the bad girls were Elisa Mazzavillani (a girl who, with her mother, runs a small winery in the Romagna region) and me.” The participants greatly appreciated all the wines, on every occasion.

“What do you think of this experience?” I ask Elisa Mazzavillani. “Do you think that these tastings in private homes could represent a new means of meeting consumers and selling their wine directly?”

“I love it!” she replies.  “There isn’t the formality of being behind a table at a trade fair. People talk to you without awe, everybody is tasting or chatting, it’s like being among old friends… And yes, I think that it could become the new way to sell wine.”

Marilena Barbera’s opinion is different. “To me, the main goal of these tastings is not selling the wine during the evening, but developing a network of contacts. My aim is to form relationships with people who are slowly becoming ‘ambassadors’ of my wines.” 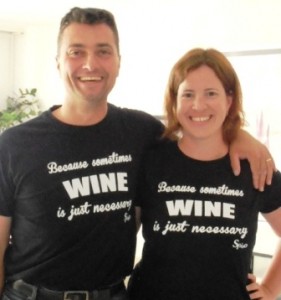 Tasting wines in private houses and meeting the producer is a lucky formula that Pier Sfriso, wine producer in the province of Treviso (Veneto) is already exporting in some foreign countries. He and his wife Reka have even set up a brand: the Sfriso #Winetime Experience. They explain: “It consists of taking our tastings to anyone who is looking for some wine entertainment in a relaxed and easy way. We take our wines, our wine tasting glasses; we select typical food from our local suppliers and then go directly to the house of the people who asked us to organize a tasting. All a host needs to have is a big enough space for at least 10 – 15 people.”

And they conclude: “We strongly believe that this format of wine tasting represents the future for small, artisanal wineries like ours. One of the difficulties with wine buying is that you don’t know what you’ve got in a bottle until you open it, while through our tastings people taste first and then decide what they like. The bottom line is that people can be lazy, and these private-house tastings provide a great service for them! From a business point of view, we are building brand loyalty with our end-consumers; communication is done by us directly, not by some intermediary (a sommelier, or an agent, or even a restaurateur); and price point is not an issue, because when your presence and your stories add value to the wine, people are willing to pay the price you ask. Meeting a producer in person who talks and shares his own wines is a great experience for the winelovers. Buying wines at the mass retail channels or in specialized stores does not deliver such value-added experience. For the price they pay consumers want more value, more emotional engagement. That’s why our customers love Sfriso #Winetime Experience so much: because we are delivering a great service in a pleasant way. What more could our customers ask?”

It’s true, the Italian winelovers are lucky, because many of them live in places close to wine production areas. So if they want to drink fine artisanal wine, it’s easy for them to go directly to a nearby winery. But this is not the case of all those are living in a big city like Milan. Thus, “Wines in my Home” could be a new formula to kill two birds (or better still, three) with one stone: to buy wine while enjoying it at home with friends, and with and the producer him (or her) self.