The Washington state wine industry is almost unbearably diverse. Just when you think you have a handle on the shapes and styles of Walla Walla – a name shared by eastern Washington’s most well-developed wine-town and one of its more populated American Viticultural Areas (AVAs) – someone pulls a Barbera out from behind the counter, or a Cinsault, or a surprising Semillon-Sauvignon Blanc blend and you’re set back to keep thinking. 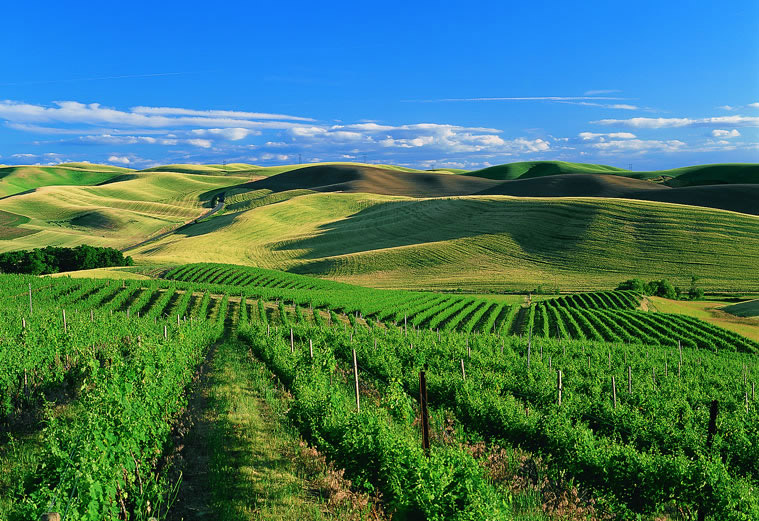 Drive an hour west to meet the edge of the broad Yakima valley and you’ll encounter the same grapes, by which I mean not just the expected Big 6 but roussane, petit verdot, sangiovese, grenache, petit verdot, carménère, and just about every other vinifera a grower can buy in the States. You’ll also find different styles of winemaking and different styles of people: less Marc Jacobs, more John Deere.

Washington is different. First: it isn’t just diverse as a state, but within each region; everyone plants everything everywhere. Second: not one of the state’s 13 AVAs has a single grape variety it can hold up as its flagship. Third: while we say “Napa” or “Finger Lakes” or “Willamette Valley,” we still say “Washington” instead of “Walla Walla” or “Red Mountain.” (The last point isn’t unique to Washington – goodness knows we talk of “Virginia wine,” though I’d point out that Washington’s industry is much bigger and better established.)

As someone who gets a kick out of unique and different, it’s all kinds of fun. But, as is so often the case, diversity comes with problems. Washington state has an identity problem. What is Napa wine? Cab. What is Finger Lakes wine? Riesling. What is Washington wine? Umm… After a week and a half in two of the state’s major wine regions and living there for three years, when someone asks me that question all I can say is “everything,” and that isn’t of much practical use when you go bottle shopping.

A lot of folk (still) want Washington to have an iconic wine. State organizations have attempted to support a run of potential iconic varieties: Riesling (alienating in a state at least spiritually dominated by reds), Merlot (insufficiently sexy; thank you, Sideways), Malbec (mal-who?). All have failed, fundamentally, because the state’s diversity refuses to be reined in.

As well it should. We’re talking an entire state here, of generous Western proportions; even if the vast majority of wine growing happens in the eastern half, that’s still a lot of territory. But crowded wine shops might have space for four bottles from Washington total, not four bottles each from the state’s thirteen recognized AVAs. It’s the classic poultry-origin dilemma: more space might be made for Washington wine if consumers knew what it was about, sought it out and bought it; since consumers don’t know what it’s about, seek it out and buy it, not much space is made for it.

Fundamentally, regional recognition is about branding. Place names are supposed to serve as comforting beacons in the bewildering sea of wine options. The adrift consumer can sight a name she recognizes and associates with a particular quality image and escape feeling as though she’s made a good choice. But big labels rely on their own branding: consumers are trained to look for and make quality expectations of 14 Hands’ racing horse-head label (a fast-rising grocery shelf brand), not its Washington association. Exclusive labels rest on their own reputations far more than on regional designations. Most of Washington’s top-tier wines are distributed by allocation with discouragingly long waiting lists. Branding worked so well for Marlborough Sauvignon Blanc because the region is full of mid-sized, export-driven wineries who could sell under the region’s shared reputation without having to fight quite so hard for individual brand recognition. Few of Washington’s wineries are big enough to bother with significant export outside the state, let alone outside the country.

So maybe the problem isn’t that Washington wineries lack a coherent identity or a signature grape. For a 5,000 case winery in Walla Walla, whether someone living on the shores of the Potomac knows you grow grapes is less important, perhaps, than how to stand apart from the fifteen other wineries down the road. Maybe someone will visit your winery not because you’re making the very best merlot in the area, but because you’re making the only mourvèdre in town.

For winemakers in California and Oregon, part of the solution to that problem has been smaller, better-defined, more exclusive AVAs. In France, the more precise the place name, the higher-quality the wine (in general). Winemakers put the bureaucratic effort into arguing for sub-AVAs (smaller demarcations within larger, established AVAs) to distinguish what they see as their distinct and therefore implicitly higher-quality produce from the increasingly crowded AVA milieu. I heard Walla Walla winemakers talk of working to single out syrah grown in the AVA’s higher elevations, and that sure sounds like a sub-AVA in the making. More broadly, others talked of a need to better define the state’s regional terroirs, encouraging growers to plant with ideal types instead of the current hodgepodge, consequently garnering higher prices for said grapes and permitting really excellent iconic wines to lead the way for smaller regional identities.

So, here’s the interesting thing: the published research says that AVAs do squat for the average American wine consumer. Excepting the largest and the oldest (mostly Napa and Sonoma, really), customers don’t recognize AVA names. They don’t understand the system, they don’t know what to do with them, and so rather than comforting beacons in the bewildering wine sea they’re just more of the bewildering sea. Studies of Sonoma have found that while the well-developed Sonoma AVA means something to consumers, its 13 sub-AVAs don’t. Appellation consistently ranks lower than brand and larger geographical designations, like state, in consumer’s purchasing decisions.

So does Washington need more AVAs, or fewer? Shooting for “Brand Washington” makes a lot of sense, really, in light of the number of wineries who purchase grapes from multiple different AVAs and then vinify the wine somewhere else entirely; a common trope here. But this brings us back to the identity problem. Even if we can accurately say that “Brand Washington” is high-quality diversity, does that help Ms. Wine Buyer know what she’s getting from “Washington State” on a label?

I don’t have a solution. But I do know this: the unquestionably best wines I tasted around Walla Walla were Cabernet Sauvignon-focused blends, supported by Merlot, Cab Franc, and Petit Verdot. But the most interesting wines I tasted were various bottlings of the little guys: Barbera, Cinsault, Roussanne, Semillon, and such. The Sleeping Dog montepulciano I enjoyed with its Yakima valley garagiste – literally; we sipped and chatted in his winery-garage – is never going to beat out Long Shadow’s elegant, powerful, addictive Chester-Kidder (a Cab Sauv + Merlot + Petit Verdot blend). But the Montepulciano was well-made and fun and different, and maybe I’d hate to see that tiny little plot of odd vines uprooted to make room for more really excellent Merlot. The preservation of the good of a few over achieving the best good of the many? Maybe, but Americans long ago decided that diversity is good for everyone.