What I Learned About Wine from Neil deGrasse Tyson

One of the great science minds of our time, and almost certainly the ﬁnest science communicator of our time, is a wine lover. Neil deGrasse Tyson has a well documented love of wine; apparently when he’s not working on unlocking the secrets of the cosmos, he’s trying to understand the secrets of Gouges, the enigmatic grand cru wines of the Nuits-Saint-George region of Burgundy. (Better stick with the cosmos.)

This is not pertinent to much of anything, beyond simply being an enjoyable fact for those who love wine and science. Tyson is on the Lunch List, my wife often says; she’s referring to the short list of people with whom we’d love to break bread and open a bottle of wine. Where do you begin the conversation with Tyson in that circumstance? You almost wish you didn’t know he was a wine lover. You could waste so much time with that alone.

I resisted the urge to talk wine with Tyson when he joined my talk show two weeks ago. I had a fast-disappearing 30 minutes. But reﬂecting on his remarks later, my mind drifted back to wine. 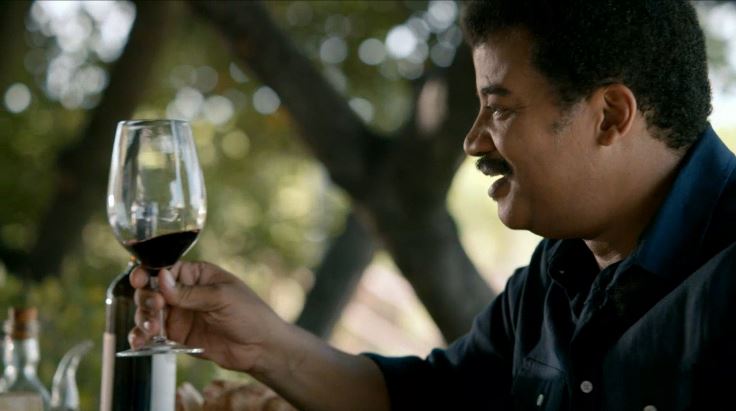 Neil deGrasse Tyson enjoys a glass of wine on a recent episode of Cosmos.

Tyson is the host of Cosmos, the reboot of Carl Sagan’s classic series designed to invigorate the American interest in our stars. Here’s what he said about the critics of his show (often from the religious community):

We’re presenting science. I’m not going to tiptoe around how you think or feel, if what you think or feel conﬂicts with objectively true observations and measurements of the universe in which we live. If you receive science politically, culturally, or religiously, that’s not the fault of Cosmos. You have issues with the universe.

What does this have to do with wine? Well, when facts conﬂict with beliefs, re-examine your beliefs, no matter the subject. I thought about some of the beliefs about wine that we clutch doggedly, in spite of the evidence. In that spirit, here are ﬁve wine facts that might conﬂict with our beliefs.

1. Weight and mass do not always equal power.

The main thing I look for in a wine is power. There are synonyms for power: concentration, intensity, volume, size, mass. (These are all nouns; their corresonding adjectives would be words like intense, massive, powerful, huge, etc.). The more mass a wine has, the more likely I am to give it a high score.

Mass does not necessarily mean intensity or power. Weight can be a burden. Imagine a trim, nimble kickboxer. Now imagine an obese, lazy person who can barely get oﬀ the couch. Which is more intense, more powerful? Do you want the wine that is a kickboxer, or do you want the lazy guy?

In that piece, Heimoﬀ tried to hedge a bit, but to no avail. His bungling of the very deﬁnition of mass was his downfall. In science, there is a relationship between mass and power, but they are not the same thing. When critics pretend they are, it should be no wonder we see winemakers striving to eliminate acidity in the name of compote-like glop.

This one is meant for the retailers who love to tell customers that “this is a 95-point wine,” as if that score is etched into the wine just as factually as the grape varieties.

4. No one is a perfect blind taster.

The best tend to be our most consistent critics, as well as the MW candidates who have to pass rigorous examination. This doesn’t mean that some of us are more adept at discerning wine in a blind setting. It can be great fun. The danger is that people who fall in love with wine inevitably ﬁnd themselves in a blind tasting, and it can be humbling. We ought not allow them to head home in shame or an illusion that they lack what the rest of the wine-loving world has.

5. Natural wines are not natural.

This has been covered before, but it’s ideally suited to Tyson’s comments about belief versus facts. And the fact is, let a grape hang without intervening and you’re not getting Jamet Côte-Rôtie. You’re getting salad dressing. Once we accept that human intervention is necessary in making wine – and it is – we’re just wrangling over the preferences on a sliding scale.

One of the ﬁnest wine writers in the world, Keith Levenberg, wrote the best defense of the term I’ve yet read. His point is that it’s a term that is quickly and easily understood. He might be right, but other terms could be understood as well, and I think he’s ignoring the faith-based fervor that the term “natural” instills. So let’s get back to our Tyson roots here: wine is not natural; that’s just a fact.

And isn’t it easier to stick with facts, and go from there? Tyson was talking about science, but he was talking about life. We’re all better oﬀ when we put facts and evidence ﬁrst, then construct our beliefs around them. Some things we know; others we don’t, and we’re open to ﬁnding the answers. When will Gouges open up? I suspect we’ll ﬁrst ﬁnd an Earth-like planet with sustainable life. I’ll keep trying Gouges, but I won’t call it natural, and I won’t apologize if I fail to identify it in a blind tasting.