Are regulations on when, where, and by whom wine, beer, and spirits can be sold a good thing? Given the Palate Press readership and my own preferences, I wish I could just say “of course not.” The truth (by which I mean in this case what the data say), being invariably more complicated than that, goes something like this. There’s no simple answer, partially because the scientific evidence is fuzzy – the data look different depending on how you slice them – and partially because it involves a value judgment. What’s a “good thing?”

The most basic question is whether reducing drinking is something we want to do. The CDC maintains that “excessive alcohol consumption” is the third-leading cause of death in the United States; it’s the second, behind tobacco, in France. Quibble with those figures – exactly what ends up in the “alcohol-related death” category isn’t black and white – but you just can’t ignore that alcohol causes a lot of death, disease, pain, and suffering. Alcohol also contributes to a lot of joy, contentment, health, and life, directly and indirectly by contributing to shared cultural stories, ideas about who we are as people. The trick of alcohol policy is discriminating between the two. 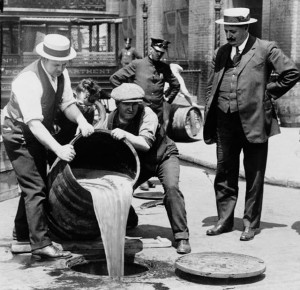 In general, alcohol policy doesn’t, and that’s a problem. Regulations should be a barrier to the excessive problem drinking that leads to bar fights, domestic violence, car accidents, liver disease, and the rest while letting responsible sippers sip peaceably. Instead, what seems to happen is that regulations annoy responsible drinkers, make hard-core abusers work harder, and knock down some consumption by some people in the middle. We could argue about how many lives we need to save to warrant how much inconvenience, or about where we draw the line between governments protecting their citizens and limiting their freedoms. But a more productive tack is to ask whether restrictive alcohol legislation actually accomplishes its goals. Do these laws work as intended? Do they reduce dangerous, unhealthy drinking? If they don’t, we can rest easy being against them.

Fortunately, we have data to answer that question…sort of. So many individual papers have been published on this topic with such variable results that turning to meta-analyses – articles that put together data from many different studies and analyze them in aggregate – should give us the most conclusive evidence. But even the meta-analyses waffle and disagree with each other. For example, the following studies lead us to believe that restrictive alcohol legislation works well:

But, on the other hand:

A real problem with research on alcohol and health is a bias against drinking that’s hard to deny. These studies invariably discuss drinking as a social problem with no acknowledgment of – or apparent desire to preserve – it as a right and good thing. Much as it tries to be, science isn’t objective. A researcher’s attitudes and approaches (and funding sources, and funding sources again) influence what she studies, the methods she chooses, and how she interprets her results which, in sum, makes it likely that the all of this published research is generally inclined toward finding evidence that alcohol is bad. 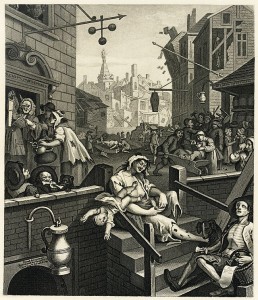 The very fact that researchers are still questioning whether policy works shows that the experts haven’t made up their minds yet, the scientific evidence is inconclusive, and the studies may be biased. So much for the data. That leaves us with that value judgment. What kind of “good” are we looking for here? And what sorts of unintended consequences are we willing to accept?

A collective review of 112 studies – performed at different times and in different countries – concluded that increasing alcohol taxes and overall alcohol prices decreases alcohol consumption, but it was less pronounced for heavy drinkers compared with the rest of the imbibing population. Increasing prices works, then, if your goal is an overall decrease in consumption, but it doesn’t take much thought to identify an obvious problem: you’ll dampen drinking amongst the poor and middling a lot more than amongst the wealthy.

Taxes don’t just decrease drinking. They reinforce a culture in which it’s more okay for the elite to drink than for the working classes. I say “reinforce” rather than “create” because this is already a cultural norm. When the one-percenter characters in Joss Whedon’s recent (utterly delightful) take on Much Ado About Nothing drink their way through the entire film, it’s endearing. Relocate them to a trailer park and switch their couture for K-Mart and now it’s dangerous and disturbing and icky. Is this justified? Of course not. It stems, at least in part, from the advent of industrialization when the working classes moved in large numbers from agricultural work to factories. Drinking during the day was common for the average pre-industrial laborer. But move that laborer into a setting where not only is he working with dangerous machinery but, more importantly (because worker safety wasn’t much of a thing), he’s obligated to produce as much and as fast as possible for the sake of the wealthy capitalist bosses. Now workers drinking during the day is a crime against efficient production and can’t be allowed. Businessmen continued to drink at lunch and at their desks until…wait, some of them still do that.

Who bears the economic cost of poor alcoholics versus wealthy alcoholics? I’m not an economist, but I know enough to know that this issue is undoubtedly more complex than it seems on the surface. I also know that economics should never be the only consideration. Your worldview may put producing as much as possible at the top of your want list. Mine balances the need for material goods with ideals about non-material quality of life. Then again, I left medical school and became a wine science communicator.

Even if you wish to argue that working-class drinking is more a problem than upper-class drinking – and the argument is there; heck, let’s start with noting that the wealthy probably pay for their own health care if they drink themselves into cirrhosis and the poor, to greater or lesser extent, probably won’t – raising prices doesn’t discriminate between social drinking, reasonable daily drinking, and problem drinking. Not a problem if you’re a prohibitionist, but definitely a problem for the rest of us. The authors of that meta-review concluded that increasing alcohol prices is a cheap and efficient way to reduce social harms from drinking, a conclusion I can only label as wildly uncritical.

Restrictive alcohol policies – so-called population-level controls – are blunt instruments for attacking problem drinking. Can’t we do better? Why, yes; we can. The other approach to trying to protect society from the ills of imbibing in excess are targeted interventions: things like education, social messages, and server training that discourage heavy consumption without getting in the way of the everyday okay drinker. We have at least some evidence that targeted interventions work, and there’s ample room for studying and thinking and exploring more along those lines. So why are we still working with those population-level laws?

As it turns out, I don’t need to pull punches. Yes, there is evidence saying that restricting alcohol availability reduces alcohol-related harms. There’s also evidence saying that it doesn’t. And in the end, all of that evidence is less relevant than noting that we can and should do better.