After a wet year, Ferrari winemakers keep calm, carry on in Trento, Italy.

Walking through hillside vineyards on a seductively beautiful fall day, bands of golden sunshine draped over serried rows of green, Ferrari winery vice president Marcello Lunelli is searching for a word to describe the worst growing season to hit Italy in 50 years.

“Unique,” he says finally, turning the word into three syllables with his mellifluous accent. 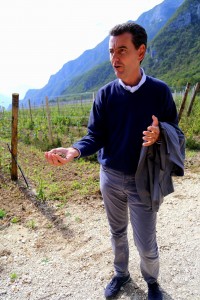 In a word, 2014 was wet. In the first six months the Trentino region in Northern Italy where Ferrari wines are grown, got as much rain as usually falls in a year.

Other parts of the country fared even worse, visited by devastating hail storms. The southern regions of Sicily and Puglia are estimated to have a 30 percent drop in harvest and overall the country could see a 15 percent decline, according to Coldiretti, the leading agricultural association.

For Trentino, the outlook wasn’t entirely bleak. For one thing, mellow autumn temperatures helped ripen grapes. Winemakers are dealing with higher-than usual levels of acidity, but that’s not necessarily a bad thing in a sparkling wine. Meanwhile, the company coped with damage by bringing in extra crews to eyeball the crop cluster by cluster and cull any bad berries in the bunch.

The upshot is that there won’t be a 2014 vintage of the company’s high-end Giulio Ferrari wine, since that comes from a single vineyard and there just wasn’t a high enough yield this year. The pinot noir sparkler, Perlé Nero, is a bit of a question mark; that decision will be made in December.

However, the company mainstays, the Brut NV and Brut NV rosé along with the Perlé, a vintage blanc de blanc and a rosé, are going forward, although not without extra effort.

It looks as if the company’s hard work is paying off. I visited the Ferrari winery as a guest at the winery’s annual “boot camp,” held for writers and members of the trade, and tasted a fledgling 2014 base wine that probably will end up as 2014 Perlé. Made from grapes grown at high altitude near the Garda Lake, it was zippy and had the bite of fresh grapefruit but no mouth-puckering tartness.

In many ways, the Trento Denominazione de Origine Controllata, known as Trentodoc, may be the best-kept secret in Italian wine.

Set on the cusp of the majestic Dolomite mountains about 130 miles from Venice, the region is gorgeous, studded with lakes and best known historically as the setting of the Council of Trent, the decades-long series of meetings that reshaped the Roman Catholic church in the 16th century.

There are 40 producers in the region accounting for 120 labels and using the same grapes as Champagne: chardonnay, pinot noir and pinot meunier. The region produces about 7 million bottles a year made in the metodo classic (secondary fermentation done in-bottle) and are a bargain, with many coming in at under $40 and even $30 a bottle.

But mention the name Trentodoc to average American consumers and you may get a puzzled frown.

Prosecco, the slightly sweet bubbly made in the Charmat method is the best known Italian sparkler and sells hundreds of millions of bottles a year. Franciacorta, in Lombardy, meanwhile, produces about 11.5 million bottles of metodo classico sparkling wine annually.

But Trentodoc is working on making a name for itself. In 2014, the Ferrari Perlé 2007 was named “World Champion Sparkling Wine outside of Champagne,” in the inaugural Champagne & Sparkling World Wine Championships organized by British sparkling wine expert Tom Stevenson.

Ferrari, the leading producer in Trentodoc and Italy’s largest producer of metodo classico, was founded in 1902 by the far-seeing Giulio Ferrari, an ambitious man who traveled to Germany and France to learn how to make a high-end sparkling wine with an in-bottle second fermentation. Passed on to the Lunelli family in the mid-20th century, the company is the leading producer in the region and owns nearly 300 acres of vineyards. It also partners with 500 winegrowing families to produce grapes. 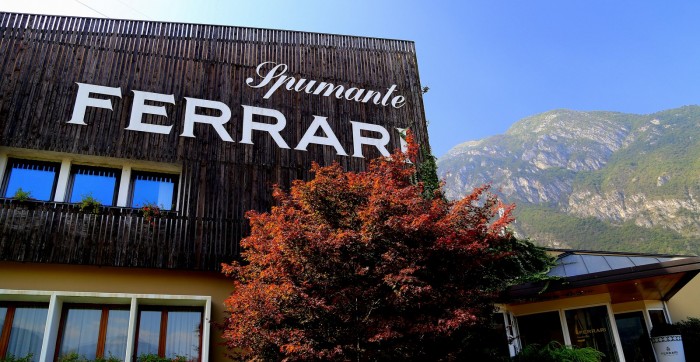 Ferrari wines range from fresh and crisp non-vintage bruts to the mellow Riserva Lunelli line, redolent of brioche and buttered popcorn, and the flagship Giulio Ferrari wine with its truffle-scented rich, mouth-filling appeal.

And no, they’re not related to the car company; in fact, the winery predates the sporty autos. That said, both are proud avatars of Italian style and Ferrari the wine company has collaborated with Ferrari the car maker for promotional events.

For the future, the Lunellis are hoping to grow their exports and help raise the Trentodoc profile generally.

For now, there’s the 2014 harvest to nurse to maturity.

Although volumes will be down, this vintage could ultimately turn out to be a good thing, says Lunelli, the company’s chief enologist as well as vice president. Having to work in a challenging environment tests resolve. For instance, despite the damp, Ferrari was able to stick to its organic growing methods, using only sulfur and copper to fight mildew.

“Probably sometimes we need to have this unique vintage to discover the potential of our region and our knowledge – to have a different product but at the same time with the same philosophy of the wine,” says Lunelli.

Just not too often.

“I hope,” he says with a smile, “that it will remain unique.”