The Salami Vineyard and the ham reborn in wine

Some days ago, on a cold morning, Eddy Marchi, a good friend of mine, rang me and asked, “Would you like to see something unusual?”

“Of course,” I replied “What and where?”

“Get ready, I’m coming to pick you up,” was all he said. A few minutes later, both of us were in his van. “I want to show you a unique place: the salami vineyard!”

Soon we arrived at a vineyard, one that looked like many others in Valpolicella. It’s winter, no leaves on the vine, the frozen soil crunching under our shoes. I looked around while my friend smiled, asking “Do you see it?”

“What!” I exclaimed “I just see a leafless, ancient vineyard!”

“Well,” he said, gesturing around us, “This is the salami vineyard. Just now there is nothing hanging on the branches, yet this is where the Vinappeso was born…” Seeing my puzzled glance, Eddy invited me to get back in the car, and he began to tell the story of a failure that turned out to be a wild success. Here is what he told me.

Walter Ceradini is a butcher living in Valpolicella. His family has raised cattle for a long time and, like many others in this region, also cultivated grapes. Years ago, his grandfather bought a vineyard in the village of Fumane, in the heart of the Classic Valpolicella region. From these grapes he made two red wines, the drier Valpolicella and the sweeter Recioto della Valpolicella, for household consumption only. Despite the fact that Walter was born in a wine region, he doesn’t drink much wine; the only wine he really likes is Recioto della Valpolicella, the type wine his grandfather made. 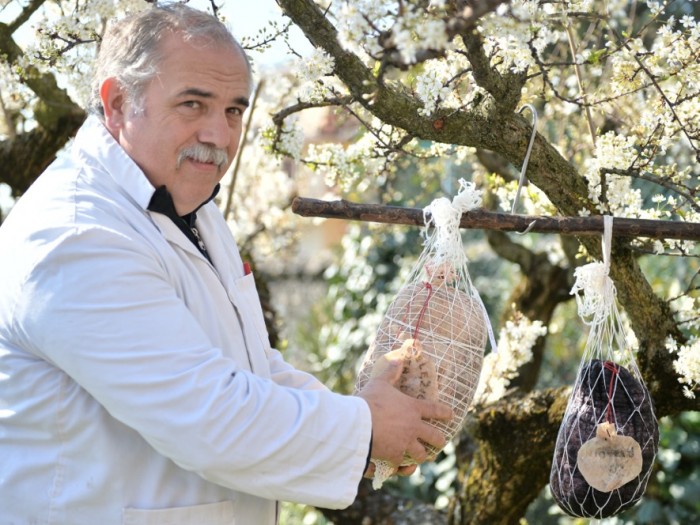 Being a skilled butcher, a few years ago Walter tried an experiment: to make a particular salume [dried ham], the esteemed Culatello. (Culatello di Zibello, made in the province of Emilia-Romagna, has been called the king of cured meats, more highly treasured than the great Prosciuttos of Italy.)

Oddly, though, Walter had never had the opportunity to taste any Culatello, so he was convinced that this kind of salume was soft and tender. After choosing the proper piece of pork, he carefully executed each step of preparing the meat, but he underestimated the importance of one detail: the climate in the Valpolicella region is different from Emilia-Romagna. Therefore, when he went to check his maturing pieces of ham, he found that they were hard and dry, completely different from his expectations (although, to tell the truth, a Culatello is not as tender as Walter had assumed).

What a disappointment: the experiment was a failure. “And now, how can I fix this?” Walter asked himself. Maybe he could soften the meat with some liquid… Rejecting the idea of water, Walter decided to wrap his salume in a rag soaked in Recioto della Valpolicella, his beloved wine. For some weeks, he kept dampening the fabric around the meat with wine. Finally, one day he decided to cut a slice of the ham and taste it. His surprise was great. Not only it had the meat become soft, it also tasted incredibly good. The sweetness of the Recioto seemed to be partially absorbed by the meat, and it had become very aromatic, too: a new type of ham was born.

Of course, it took a while before Walter finalized the formula for his product and found the right combination of wines – he tried using both the dry and powerful Amarone della Valpolicella and the sweet Recioto – for the best balance of taste and flavors.

But this was only the beginning of a new adventure: following his first new style ham, others appeared. In his old butchery with its small shop – this is where we finally arrive. Today Walter Ceradini produces and sells seven different types of his ham, which is called Vinappeso [wine-hanging].

The most important Vinappeso hams are three styles, romantically named Isabella, Giulietta and Aida: “My mother’s name is Isabella, so the very first salume, created by chance – or by mistake if you like – is dedicated to her,” explained the butcher. “The second type is Giulietta, and the third is Aida, like the famous opera: it’s a ham made from adult pigs, whose meat is matured for two years and then aged for at least four months in wine, mainly Amarone della Valpolicella. That’s the reason why I call it Aida, because it is like a triumph of flavors and taste”. 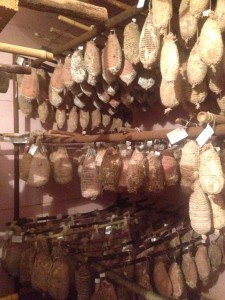 The other products he makes are a soppressa (sort of soft salame, typical of the Valpolicella and Veneto areas), a speck ham, a cotechino (large boiled pork sausage) and now “Romeo” which is the temporary name for another original ham. “Try it,” Walter urges me, cutting slices of this ham and passing me a few pieces of bread. “It’s another piece of pig soaked exclusively in Recioto della Valpolicella.” The color of the meat was a bright dark red, the flavor extremely appealing; it was just 10 o’clock in the morning, yet all of a sudden I discovered I was quite hungry! The taste? Absolutely delicious.

“In the process of making a ham you need to use a lot of salt, because salt is a preservative,” my friend Eddy told me. “However, not everybody loves very salty food. Instead, in this ham the sugar of the Recioto perfectly offsets the salinity, and the result is a ham that is tasty yet balanced.” I cannot agree more.

Walter continued the tale: “As they are tasted and become better known, these salumi are increasingly in demand. However, we cannot produce too many of them, because we use only the best pork raised in Italy, and the whole process of seasoning and refining takes two or more years. It’s like making a fine Recioto della Valpolicella. You cannot be in a rush.”

So here is the story of a new, great Italian ham wedded to a great, Italian sweet wine. And if you are still wondering about the salami vineyard at the start of this article, well, it was just my friend’s joke, something to whet my curiosity. But in fact, in the near future Eddy, Walter and their coworkers are going to hang some salumi here and there in the vineyard during the tourist season, to illustrate the close connection between the grapevines and the ham. After all, if Walter had not been a fan of his grandfather’s Recioto, it’s likely that these delicious hams, refined in wine, would never have been born.