I couldn’t remember the last time I climbed a ladder. Living in New York for over a decade, it’s just not something I ever have to do.

Looking at its narrow frame and spindly rungs, lashed to the top of a seemingly skyscraper-high steel tank by a single, knotted rope, I was briefly prompted into panic. But winemaker Andries Burger’s comment echoed in my head: “the two French girls we had last season did everything the men did. They carried buckets up those ladders.” With my right leg trembling, I fought the instinct to remain grounded and clambered to the top, balancing the metal handle of my plastic container of nitrogen addition (to keep yeast happy and functioning), awkwardly in the crook of my elbow.  It would be a small, short-lived victory. By the end of the day, ladders posed no more challenge than climbing into a car. I had a new problem: how to punch down Pinot Noir grapes without falling into the tank (and suffocating from CO2). 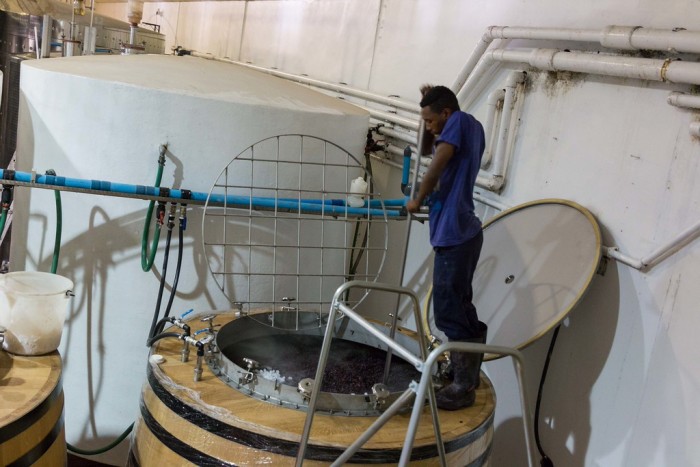 Winemaking is a physically demanding job. Particularly during harvest when hours are long and grapes are waiting; days can start as early as five in the morning and continue well past the last rays of light for months. As a writer on the topic, I felt understanding the finer details of the process, set within the broader framework of the wine industry as I already knew it, would make me a better, more insightful journalist, and possibly more sympathetic to the challenges and choices winemakers face.

To sample the experience, I elected to join Paul Cluver in Elgin, South Africa for an unpaid, two-week internship during the recent 2015 vintage. My participation was part of a larger initiative aimed at encouraging women to work in the wine industry, the brainchild of Kathy Jordan of Jordan Wine Estate in Stellenbosch.
The “women in wine” mentoring program elicited applications both from around the world and locally, in conjunction with the support of Jancis Robinson (the world’s most notable woman wine journalist), to join harvest with a member winery of PIWOSA (Premium Independent Wineries of South Africa, a collection of likeminded producers pooling their marketing dollars and power.) Applicants needed to hold either a winemaking degree or the WSET Diploma. I carry the latter.

My résumé was selected by a winery nestled in the cool-climate Elgin Valley. Burger, the longtime winemaker, earned a reputation for producing elegant Chardonnay and Pinot Noir, along with one of the finest sought after Rieslings in the country. Not being available in the New York market, I banked on the Cluver reputation by flying to the southern hemisphere to work at a winery without having first tasted its wines.

Tall and burly with vivid blue eyes, I figured Burger for the winemaker as I exited Cape Town airport. We drove off in his bucky (South African for truck) and 45-minutes later arrived for lunch at the local Elgin farm stall/bakery/pie shop Peregrine. Eager to jump into the rhythm of the country’s meat-hearty diet, I opted for a taste of the native game and ordered springbok pie (antelope-gazelle, ubiquitous around southwestern Africa). 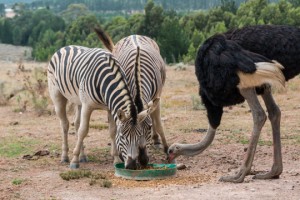 My accommodations (like many of the winery employees, as well as the entire Cluver clan) sat two kilometers deep into the family farm, a sprawling property of apple and pear orchards, and vineyards, defined partially by mountain borders. The Cluvers carved out space for a wildlife sanctuary (home to two zebras and two ostriches, comically fed from jumbo bowls) and built a challenging mountain biking course to tempt ripped athletes in colorful Lycra from around the world. A natural amphitheater set within towering ghost gum trees drew a large domestic audience for monthly summer concerts.

I was assigned a modest cottage, an old laborer’s dwelling that sat at the base of several vineyards (the same Pinot grapes I’d be fighting with later in the week). A rondavel formed the attached bedroom. It had a conical thatched roof like those that capped traditional dwellings in the bush or luxury safari properties mimicking the experience for well-heeled tourists. My temporary home fell midway on the spectrum between the two (I had hot, running water, but lacked a dedicated gin and tonic butler.)

That first night, I collapsed on the bed; I hadn’t lain down in nearly thirty hours since departing New York. Peering into the shadows of the cone-shaped ceiling, I wondered if I might find a bird (or a bat) nesting in its cavity. Outside, the wind surged and retreated, beating at the hut’s walls like the pounding of ocean surf against an intruding rock. At that point, the reality of my location finally switched from dream state to “on.” I was alone, in the dark, on a wine farm, in Africa. Mercifully, sunlight washes clean the dramas of the nocturnal mind and I awoke fresh for the start of my first day.

Mornings at the winery started just past seven. One facet of the harvest experience I would escape was grape picking. Hand harvesting of bunches occurred in the chilled air of night. Local workers were trucked out to designated rows at ten o’clock P.M. where they snipped with shears and headlamps until dawn.  It looked difficult; exhausting. But the grapes, ranging from Riesling, Sauvignon Blanc, to Pinot Noir, remained cool, plump, and taut for pressing the following morning, while the workers avoided the grueling daytime heat.

The days took on a fairly predictable, labor-intensive routine. After the dawn delivery of fruit (the pickers would head home to snooze until dusk), grapes were hand-sorted to pull out rotten, infected, shriveled, or generally defective specimens. Pictures posted near the table reminded workers what flaws to identify. The female team, composed of permanent and seasonal employees, always sorted. Never the men, who made up the core team of cellar workers. The ladies chatted and laughed about the daily soap opera viewed the night before (so they said). Speaking Afrikaans, their dialogue was inscrutable, but they seemed amused at teaching me words so they could snicker at my atrocious pronunciation. 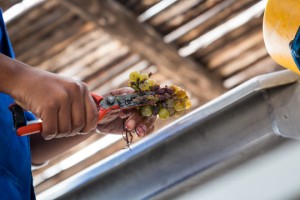 After the sorting table, grapes went through the de-stemmer (unless left intact for whole bunch pressing, e.g., Chardonnay). White grapes then went to the Vaslin press, and red grapes went into tanks to start cold maceration. The rest of the day was spent monitoring the progress of presses, cleaning, tasting and recording the development of ongoing fermentations, cleaning, punching down red grapes (the act of puncturing the thick “cap” of grape skins and solid matter that float to the top of a tank so as to integrate it back into the juice below), cleaning, making additions with buckets on ladders (like the aforementioned nitrogen), transferring wine between tanks, cleaning, and then washing down equipment, followed by cleaning, cleaning, and cleaning. I started to believe winemaking was 50 percent cleaning. (Another winemaker I met estimates it at 75 percent).

We spent lunch as a family, or at least I felt like I carried the Cluver surname given the warmth they extended and interest they took in my city life back in New York. Burger actually is family: he married Inge Cluver, the eldest daughter of Dr. Paul Cluver (the patriarch and a former neurosurgeon), who works in the office alongside her brother Paul (the managing director), Karin (production director), Inge (financial manager), and sister Liesl (marketing director). For a family that lives a short stroll away from each other, and works an even shorter distance apart, they maintained a remarkable harmony.

Repast discussions toggled between updates on the vineyards to updates on the orchards. The other hot topic: installation of a new solar panel system. South Africans have endured a year of “load shedding,” a polite term for the equivalent of rolling power blackouts scheduled (and sometimes not) around the country, instituted by the mismanaged, national power company to deal with an aging, overloaded grid. With many more years of blackouts projected, the Cluvers had the foresight (and wherewithal) to reduce their carbon footprint as much as to protect their investments.

The energy at dinner was different. The cellar staff and winemaking team gathered for evening family meal (exclusive of the women who cleaned and sorted). Offerings cooked or purchased by the daytime staff, were simple and hearty — sausages, chicken, hot dogs, and salami sandwiches. Most nights, dinner only provided a break in the work before the men returned to the floor to finish the last press and then, of course, clean.

Continued in Part 2: The life of a cellar worker