Perhaps the most vivid memory of my wine training is of repeated olfactory forays into containers stuffed with leather, lavender, grass, beef jerky, etc., in order to discover signature wine aromas and flavors. Though it may be cliche to use the term wine epiphany, I certainly had my fair share during this particular exercise, gaining a profound understanding of my favorite (and least-favorite) varieties like never before.

What does this have to do with beer? Well, like grape varieties, different hops have unique, distinguishable aroma and flavor signatures. Admittedly, in the past I’ve generally referred to IPAs and the like as “hoppy” or “bitter”, rarely going much deeper. Enter Hop Blast, a product that introduces the concept of hopboxing (no, not hotboxing), or enhancing the aromatic experience of drinking a beer through the redolence of floral pellets. 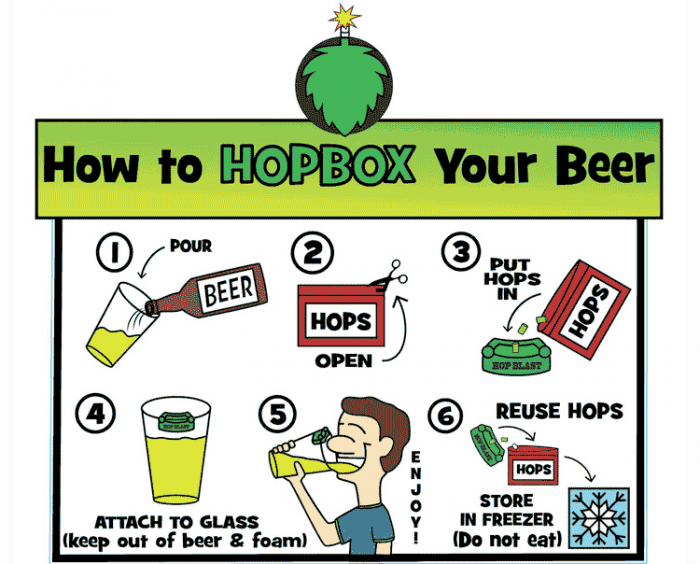 Yet, when I try it, attached to a mug of Victory Headwaters Pale Ale, my mind immediately returns to wine class, geeking out on how Syrah smells like bacon. With Simcoe in the box, the beer is ripe, bold and fresh, Headwaters’ signature aroma shining through, a hopheads delight. When it’s Citra’s turn, the brew mellows, becoming more subtle and fruity.

Tröegs Pale Ale pairs Cascade with Amarillo, and though both tend towards citrus flavors, Cascade’s brightness brings out the bass notes of Amarillo, showing it as spicy and deep.

Great Lakes Edmund Fitzgerald Porter also features Cascade, albeit subtly, favoring rich, roasty sweetness. As I detest porters and stouts that are aggressively hopped, I enter this trial with trepidation, and don’t particularly care for the acerbic pith that is highlighted. That said, it is interesting to experience this excellent brew from a slightly different perspective.

Though the makers of Hop Blast recommend trying hops that aren’t in the blend – especially for advanced users – I haven’t attempted this as of yet. Conceivably, home brewers might even use the widget to get a general idea of what hops to add to a recipe (though certainly it is no replacement for good old trial and error).

The question remains: is a Hop Blast actually needed to conduct these experiments? Couldn’t we just use a similar method as with wine training — put some hops in a small bag or container, take a sniff, then smell or taste the beer?

Maybe we should even try it in wine class.