I had expected great things from my first experiences with cocktail bitters. Bitter flavors are great, and so are condiments. Make me a kale and radicchio salad spiked with anchovies, garlic, and mustard and I’ll nosh contentedly. So I was surprised, when I splashed some of the classic Angostura on a spoon to find that the stuff just flat-out didn’t taste good. Culinary mud, and a strange flavor I just couldn’t place. Dashing some into a finger or two of gin yielded little improvement. The rest of the bottle ended up in the trash.

I think that part of what attracts us twenty-first century people to fancy cocktails (and to fine wine) is uncertainty, mystery, even a little magic, all mixed with a pleasant loss of control. Ordinary algorithm-controlled lives can leave precious little space for magic. Experiencing a loss of control is far too often an entirely unpleasant thing that happens at the DMV. So we end up craving pleasantly uncontrolled experiences, but then maybe aren’t all that well prepared to deal with them. Cocktails offer limited duration, low-risk magic. In the worst-case scenario, you decide that Angostura’s secret blend makes everything taste like the bottom of your shoes in April and never order a Manhattan again.

But we’re twenty-first century people. We have chemistry. Our television shows feature characters who solve mysteries aided by some mysterious unknown substance collected at the crime scene and a Very Shiny Machine (VSM). The VSM identifies the mystery substance as book-binding paste, and Professor Plum is convicted for the murder in the library because he had paste on his shoes. So how the heck do secret recipes remain secret? Can’t we just insert a vial of Angostura bitters into one of those swanky VSMs and have the answer to the mystery pop out? 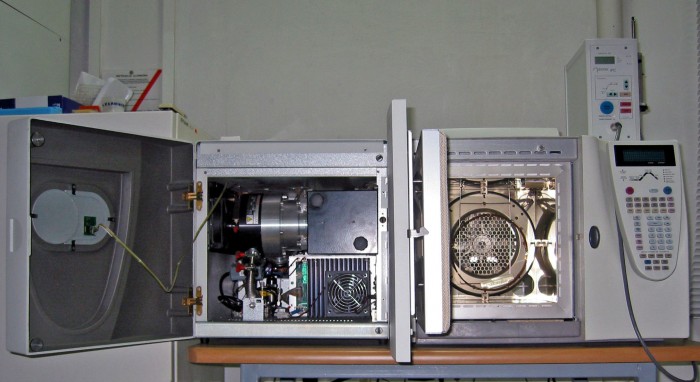 The answer is yes, no, and sort of, depending on how you look at it. Yes, analytical chemical techniques could be used to demystify the muddle inside bottles of secret-recipe bitters and liquors. No, knowing what molecules are inside the bottle isn’t quite enough to give you the recipe. Sort of, because chemistry should be able to give you enough for some targeted trial-and-erroring. Still, doing so would be a lot of effort, and with so many variables involved in how each different ingredient is processed it seems inevitable that you’ll end up with a few remaining mysteries.

One reason why sussing out a secret recipe is so complicated is because mixtures can be more than the sum of their parts. What goes in is not necessarily what comes out. Several members of the sensory science team at the University of California Davis recently profiled 16 common cocktail bitters: Angostura, plus a review of the numerous other bitters styles on the market. They weren’t trying to steal anyone’s recipe. Theirs was an exploratory mission, spelunking for the sake of figuring out just how deep those caves go rather than setting out to plunder whatever loot someone else has hidden inside. Their sensory panel agreed on 30 different aromas to describe what they smelled across those 16 samples. Some of those aromas are attached to likely-sounding bitters ingredients: cinnamon, clove, celery seed (especially for celery bitters), grapefruit peel (especially for citrus bitters). But some are almost surely not part of any recipe: soap, orange jelly beans, damp soil. And while it’s possible that recipes might call for dried apricots or cola, those aromatic resemblances are more likely the result of perceptual blending.

Perceptual blending is the fancy chemical term for the phenomenon of smelling or tasting a mixture as something other than the arithmetic mean of its ingredients. You could call the signature aroma of freshly-baked chocolate chip cookies perceptual blending, since you’ll walk into the kitchen and call out “cookies!” rather than “flour, sugar, eggs, and chocolate!” You can no longer smell each ingredient individually; they’ve created something new. But cocktail bitters are, according to the Davis folks’ sensory analysis, even better examples because not only can you not reduce them to the sum of their component parts, but their component parts don’t do a great job of predicting how they smell. 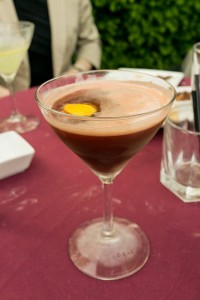 The Trinidad Sour is a bitters-centric cocktail that calls for a whole ounce of Angostura bitters (photo:Edsel Little/flickr)

Chemical analyses showed that the 16 different bitters the scientists tested shared a lot of common ingredients. That’s hardly surprising. When you look at the differences, though, things get interesting. After some complex statistical analyses mapping together the human sniffing data and the chemical analytical data, the team concluded that about 75 percent of the chemical differences among the bitters contributed very little to sensory differences among them. A fairly small part of the recipe-to-recipe variance in chemical composition – from different ingredients, or different processing techniques – drove the overwhelming majority of differences in how the bitters smelled.

The same sort of complexity pops up in wine blending. In many cases, a blend of merlot and cabernet sauvignon, for example, will taste as you’d expect: arithmetically, proportionally, somewhere halfway in between the original characteristics of the merlot and the cabernet. Formal sensory analysis by the folks at Davis support that conclusion. But sometimes one sensory characteristic of one of the components of the blend is peculiarly dominant: it contributes far more to the aroma of the final blended wine than it should on the basis of its chemical presence in that blend. Or, conversely, a sensory note of one of the blending wines may end up obliterated in the blend, contributing far less than chemical composition would suggest.

In other words, when you put together the chemistry and the human experience, the idea of trying to predict how a bitters recipe will smell from a list of its ingredients falls apart. So we have a mystery. Why do Angostura bitters smell the way they do? How do lots of aromatic ingredients combine to produce a unique aroma? We might say confidently that Professor Plum had book-binding paste on his shoes, but don’t ask the analytical machine to predict how the paste smelled. And reverse-engineering a secret recipe is a bit more complicated than it might seem.

From a chemistry or a sensory analysis perspective, this sort of mystery is a little disturbing, or at least a problem left to be solved. If what goes into a recipe isn’t what comes out, then what happens in the middle? But I find that sort of non-linearity reassuring. Sensory chemical complexity means that all our fancy twenty-first century algorithm-driven attempts at creating recipes are still missing something. A program can suggest likely combinations for a new cocktail recipe, but the program can’t actually tell you how the end result will taste, not exactly. Humans with noses still have ample scope for creating – and experiencing – mystery in rocks glass-sized portions. And I still have an excuse for why, even though I might in theory like all the ingredients, I still don’t want to order a Manhattan.